Dan Royal won Buy-Side Trader of the Year at the 2018 Markets Choice Awards. Markets Media recently caught up with Royal to discuss his career thus far and thoughts on the future.

Talk a little about your career background and current role and responsibilities. 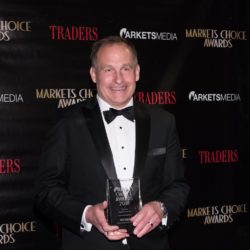 I’m Global Head of Equity Trading for Janus Henderson, which has about $370 billion in assets under management. We’re about a year into the Janus-Henderson merger. Prior to that, I had the same role at Janus Capital. I started with Janus in 2001, and I took a two-year hiatus from 2006 to 2008 when I went to Artisan Partners to run trading and operations globally.

My role has expanded with the merger. From a responsibility perspective, it’s as you’d expect with a global head role — we have a team of six traders including myself here in Denver, plus teams of six and five in London and Singapore. We have centralized dealing in each of the regions. We trade largely equity — we do a bit of FX here and there, plus some equity derivatives and some futures. We handle a multitude of different strategies and PM needs. Janus was largely a U.S.-focused manager, while Henderson was largely European-focused, but both were global. The merger certainly gave us a bigger presence in each of those regions collectively.

I try to trade as much as I can, but that can be a little challenging because I get pulled a lot of directions.

What have been some key takeaways from different organizations you’ve worked at?

I’ve had the privilege to work for some great firms. I started with Cargill back in 1984, on the floor of the CME. I spent 11 years with Cargill, which is a very large, privately held, commodity-based business that prides itself on integrity and doing the right thing. So making sure that our footprint was completely compliant, and our actions were in the best interest of the marketplace and our client, was how I was raised.

From there, I worked for two different commodity trading advisors — SJO Asset Management in Chicago and John W. Henry and Company in south Florida.

By working for a number of different places, you get to see what works and what doesn’t, which is valuable experience in trying to build out an operation that works. My role right now is to make sure we have an environment and platform that allows the team to succeed. That entails making sure we’ve got the right policies, people, systems, and support network. Ultimately, it’s the people that make the company successful.

I don’t know if there’s any one person I can point to to say that they were a huge influence on my career. But I’ve worked with great people throughout, which I think gives you the DNA to know to do the right thing.

Who are some key members of the JH trading team?

It’s really hard to say because we run a flat structure and really every single person on the team is key to our success. So I point to the entire team — the integration, the cooperation, and the way everybody works together is truly the reason we our team succeeds . Each team member has certain skill sets that they bring to the table, but it’s truly the entire team that makes us successful.

Beyond the team members, we have an incredible network of brokers and vendors that supports our efforts and vision. The solutions they provide are vital partners to our efforts.

We ask everybody involved to be focused and driven from the perspective of servicing the PMs and making sure that we’re doing the work in an accurate fashion. It’s also really important that we have a good outward-facing footprint and be good industry citizens.

What has changed and what has stayed the same in your 34 years in the business?

The principles of trading and markets — in terms of how you look at a stock, how a stock acts and then reacts, and the dynamics of liquidity — remain pretty consistent. There’s a certain perpetuity in terms of how things trade. Whether it’s a stock, or FX, or some type of fixed-income or commodity product, there are behavioral characteristics to trading that don’t change.

What has changed is the automation and the technological boom in our industry. The pace of transactions and dissemination of information occur at inconceivable speeds. Moving from paper tickets and open outcry trading environments to electronic communication and automation, has truly been revolutionary. I feel we’re at the cusp of significant shifts in the institutional trading space, where automation and artificial intelligence really integrate into our workflow.

What is the ‘secret of your success’?

Treat people with respect. Realize that we all have roles in this industry — you have to let people handle their roles, and you have to allow people the chance to have discussions and opportunities to interface with our business. Utilize the people around you to their strengths, partner with good people, let people do their jobs, and create an environment for people to succeed. And really treat people with respect.

What would be your advice to someone starting out in institutional trading?

My first bit of advice is: carry yourself with integrity through everything you do.

Another piece of advice is to be open-minded and realize that you don’t have to have everything figured out on day one. This business evolves, and opportunities can present themselves at any time. So, stay the course, be open-minded, and make sure you’re managing your own personal franchise with a lot of integrity.

What is the future of the equity trading desk?

I think a big theme is that automation really starts to ramp up in terms of finding its way onto institutional trading desks. Also, automation backing up into the portfolio manager and into the back office — pretty much throughout the entire ecosystem of equity trading — is probably something we’ll see over the next several years.

Also, it is inevitable that at some point artificial intelligence will supplement, and potentially sometimes replace, human input when it comes to liquidity capture. I think that makes us more efficient.