Closing Auctions To Continue To Grow

Volumes in closing auctions in Europe will continue to rise by 3% to 4% each year and reach 50% of all European trading activity within eight years, according to analysis by Liquidnet, the global institutional investment network.

Liquidnet projected the increase in volumes in a report, MiFID II Liquidity Landscape: Review of 2019, based on the linear trend over the past two years. The study continued that volumes are climbing faster in certain markets with the Autorite des Marches Financiers, the French regulator, highlighting that 41% of the country’s blue-chip index, the CAC 40, was traded on the close in June last year. 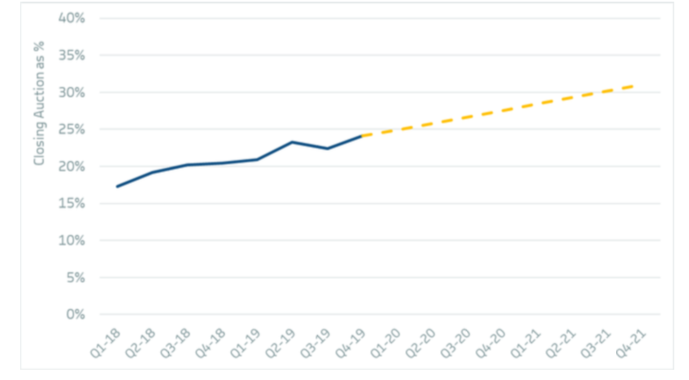 “While the rise in closing activity is of concern in the longer term, market participants have a more pressing problem in 2020 to address how capped names will trade once periodic auctions are no longer admissible,” added Liquidnet. “Both issues will only add to the decline in continuous lit market activity requiring greater analysis to select the most appropriate execution strategy given the potential market impact.”

Tim Cave, analyst at consultancy Tabb Group, said in a blog that closing auctions in Europe have begun to account for as much as 25% of a stock’s average daily trading volume due to the growth of passive investing where funds  are benchmarked to the close.

“For many buy-side traders, bigger closing auctions aren’t necessarily a bad thing,” he added. “They help centralize more liquidity in a single point in time, maximizing price formation and volume crossed. That said, it is leading to reduced confidence in intra-day prices and, given closing auctions are a natural monopoly, there are concerns they represent a single point of failure.”

The European Securities and Markets Authority’s consultation this month on the impact of MiFID II asked whether the regulator should take any action on increased volumes in periodic auctions. Esma is due to publish a final report on changes to the regulation, which went live in the European Union in 2018, in July.

Cave wrote: “While Esma should be keeping a tab on trends such as the rise of closing auctions, it seems there is little it could do from a regulatory perspective. In any case, there are a number of initiatives already underway which may help slow down or reverse this trend. Several trading venues, including Aquis Exchange, Cboe Europe and Turquoise, have launched or are planning to launch alternative closing order types.”

Liquidnet noted that European liquidity remains fragmented and MiFID II has not increased lit volumes activity, so it is not surprising that the regulation is being reviewed.

“However, exactly how MiFID will be addressed becomes interesting considering possible regulatory divergence between the UK and Europe post Brexit in 2021, planned forthcoming regulatory changes to periodic auctions and the outcome of Swiss equivalence on European trading,” Liquidnet added.

Liquidnet continued that Esma ’s opinion will limit the conditions under which periodic auctions can operate which is important as they can account for a third of trading volumes in stocks which have been suspended under the MiFID II double volume caps, which aimed to shift volumes away from dark pools.

Periodic auctions are different from the traditional opening and closing auctions on exchanges as they can last for very short periods of time during the trading day and can be triggered by market participants, rather than the venue. They are considered to be lit trades under MiFID II, as the indicative matched size is published prior to execution.

“Under the ESMA opinion, where the period auction is deemed non-price forming but eligible to operate under the reference price waiver – such as the use of pegged orders or systems that lock in prices at the beginning of an auction – the expectation is that these orders will be subject to double volume cap restrictions, requiring alternative execution strategies to avoid trading on lit markets,” said Liquidnet.

Cave said volumes of periodic auctions have increased under MiFID II, accounting for around 2.5% of on-exchange activity. He continued that requiring periodic auctions to disclose all submitted orders significantly increases the level of data they are required to disseminate and would bring the venues into line with most closing auctions.

“More information would allow users to identify imbalances, participate in auctions and improve their price-forming characteristics,” he added. “The concern is that because periodic auctions are open during continuous trading hours, unlike opening and closing auctions, disclosing too information could jeopardize users’ trading intentions.”

My quick take on ESMA's MiFID II consultation this week which, to be frank, could end up in ripping up the rulebook as it relates to equity trading and starting again… https://t.co/hMMZr5twz6

He said both banks and electronic liquidity providers have launched SIs under MiFID II, and Esma estimates that they are responsible for around one-fifth of European equity volume.

“There is clearly merit in reviewing the SI regime, to ensure it is being used for principal activity only and to examine the difficulty in identifying what is truly addressable activity,” Cave added. “That said, removing the regime entirely as an execution mechanism for equities seems a step too far. It would restrict investor choice and remove an important check on exchanges”

Liquidnet said that a greater focus on the definition of addressable and non-adressable liquidity within SI performance calculations could contribute to a better understanding and subsequent improvement in SI execution quality. The report cited a recent study by Big XYT which analysed an institutional order of €10m Munich Re shares traded on December 12th last year.

“Including all trades, the example order represented 2.71% of the days reported turnover, but by removing non-addressable liquidity, the percentage of daily turnover rose to 5.41% requiring a doubling of volume and target participation to complete the order with necessary minimal impact,” added Liquidnet. “Understanding true levels of SI activity will become more important during 2020 given the increase in the number of European SIs registering versus last year and how these will operate in a post Brexit environment.”

The European Forum of Securities Associations said the European Commission should urgently review parts of the systematic internaliser regime in a letter last month.

Along with other trade associations, AFME today published a letter on how areas of #Mifid2 need to be recalibrated to avoid unintended harm to the market and to deliver on the intended outcome of the policy.

EFSA members said they were concerned by new amendments to the tick-size regime for SIs.

“The application of the tick size regime above large in scale (other than trades executed at mid-point) will in our view not contribute to the price discovery process for large-in-scale (LIS) trades and may actually inhibit appropriate price formation between systematic internalisers and their clients,” added the letter. “Furthermore, the ability to execute large in scale trades on a sub-tick basis provides meaningful price improvement for clients trading in large sizes which brings benefits to end investors.”

EFSA recommended that tick sizes should not apply to any transactions that are above the LIS threshold and that for all order sizes, the mid-point should remain a valid execution price permitted to trade at a half tick, both on trading venues and with systematic internalisers.