Changes are afoot in the derivatives markets as regulators and market participants grapple with the new realities of electronic trading of both listed and OTC instruments. The Dodd-Frank Act, which mandates that most OTC swaps be traded on swap execution facilities, reported to swap data repositories, and centrally cleared, is clearly a game changer for companies that do business with U.S.-based firms.

“Change is occurring fast,” said Matthew Dowd, U.S. business development manager at TMX-Montreal Exchange. “I was as a floor trader on the NYBOT for 20 years. Now I’m working for the Montreal Exchange. When I was on the trading floor, I didn’t like change… but for our end users and participants, we embrace change to benefit the greater good. I now am able to see that change isn’t a bad thing when used to advance the marketplace.”

The topic came up repeatedly during a roundtable that took place at the recent Markets Media Global Markets Summit. “My biggest takeaway from the roundtable was change, what’s on the horizon for our marketplaces and what we’re doing to get there,” Dowd said. “It seemed a lot of the discussion was about change and how to manage it best for all involved.”

As the U.S. business development officer for the Montreal Exchange, Dowd is responsible for helping to develop new products that respond to changing market demands.

“We were working to build out our yield curve when I started, so I was initially talking about our fixed income derivatives,” he said. “Montreal Exchange is the derivatives exchange for Canada. Most of our cash equities trade on the TSX, and both fixed income and equity derivatives trade on Montreal Exchange. When I was on the trading floor, trades took place in the pit with people actively “battling it out” to get the fairest price discovery.”

The new infrastructure is expected to deliver a nearly 300% improvement in trading response time with an overall median response time measure at the network edge of approximately 460 microseconds. 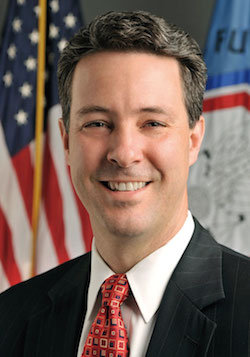 “Exchanges today function more like IT companies,” said Dowd. “It is about making trading more efficient and finding the right technologies to get the trades done right.”

At the roundtable, Dowd discussed Montreal Exchange initiatives regarding a recent change to its trading hours from a schedule with a couple of trading halts during the trading day to one that is continuous from the morning open to the close. “What seemed like such a simple change in our trading schedule had a lot of feedback from the participants, both for and against so we had to investigate what was best for the market as a whole and take that to the regulators for approval,” he said.

Canada is developing its own OTC derivatives regulations, using Dodd-Frank as a roadmap. “Regulatory boards in Canada are following what is happening with the regulatory development being handed down in the U.S. closely,” Dowd said.

During a speech last week, Scott O’Malia, commissioner on the Commodity Futures Trading Commission, touched on the sweeping impact of Dodd-Frank globally, specifically its applicability to all foreign operations in the United States on behalf of non-U.S. persons.

”I cannot fathom a “direct and significant” connection to a swap transaction between a London bank and a Swiss swap dealer when personnel or an agent of a non-U.S. person happens to negotiate the swap in New York,” O’Malia said. “I also cannot fathom why a non-US multilateral swaps trading platform located outside of the U.S. that provides personnel or an agent of non-U.S. persons located in the U.S. with the ability to trade swaps must register as a SEF.”