Corporate bonds are proving to be a safe haven for institutional investors as speculation continues on whether and when the U.S. Federal Reserve will begin tapering its purchases of U.S. Treasury bonds.

High-yield bond funds posted $3.28 billion in inflows in the week ended July 24, the highest since October 2011, according to Thomson Reuters’ Lipper service.

“The corporate bond market is a great place to be, as there’s very little downside risk,” said Doug Forsyth, chief investment officer, fixed income, at Allianz Global Investors. “There’s very little risk that defaults will skyrocket because of the amount of cash that’s on hand.” 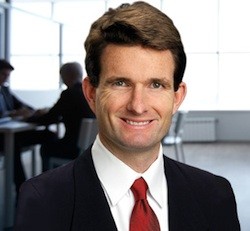 Forsythe noted that with the duration on 10-year Treasury notes hovering near nine, high-yield corporate debt is performing better than other fixed income sectors.

Duration is a measure of a bond’s sensitivity to interest rate changes. A duration of nine means that for every one-point rise in interest rates, the price of a bond will fall by nine percent.

“Nearly all strategists agree that the outlook for credit is constructive, with minimal defaults projected for both the remainder of 2013 and 2014,” Forsyth said.

Fed chairman Ben Benrnake’s comments in May that the Fed could reduce its stimulus later this year if the U.S. economy looked strong enough triggered a selloff in the bond market and led investors to pull $51.5 billion out of taxable bond funds in June.

“Rates shot up quickly in June because the Fed did nothing except say the wrong sentence,” Forsythe said. “A knee-jerk reaction over the potential withdrawal of monetary stimulus pressured all high-yield bonds. By month end, the market had partially recovered and a more normalized response to rising rates materialized among the ratings classes.”

While retail investors were plowing out of bond funds in June, institutional investors were ramping up their purchases of fixed income assets, according to data from TRACE.

“Long dated buying took hold as pension funds, sovereign wealth funds and insurance companies bought at the long end through the selloff, resulting in positive net trading flows, even while retail investors were pulling money out of ETFs and mutual funds in response to rising rates,” said Alex Sedgwick, head of research at MarketAxess, in a blog posting.

This trend is also evident in measures of net dealer inventory positions, where the net long high trade position for primary dealers fell to a low of $6.3 billion during the week of July 1. At the time, this was lower than high yield inventory, which has remained more or less steady at $7 billion.

“Dealer inventory values give us potential insight into many elements of the market – it’s a reflection of their market exposure,” said Sedgwick. “If buy-side traders are selling bonds at a greater rate than they are buying them then broker/dealers may see short term increases in their inventory. Over longer periods of time, increases in inventory levels suggest that either broker/dealers are comfortable accepting greater market risk or that they are prepared to support higher trading volumes.”

Credit statistics support investment in the asset class, according to Forsyth. Balance sheets are solid. Leverage ratios and interest coverage ratios are near, or better than, levels seen in the past 20 years. Corporate cash levels remain high, and acquisition activity is ongoing.

“Lower-coupon new issues have produced a lower semi-annual interest expense burden, and the widespread availability of new capital has eliminated near-term amortization risk in the market,” he said. “In addition, the lack of high-single-digit income alternatives has kept investors engaged.”