CurveGlobal To Expand Products and Geographies

CurveGlobal, the London Stock Exchange Group’s interest rate derivatives venture, is expanding in the US and is also focused on growing its product range and increasing automation and integration.

Andy Ross, chief executive of CurveGlobal, told Markets Media: “In 2020 we will focus on new products and new regions.” 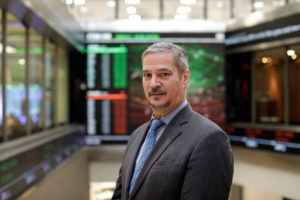 As part of this expansion, Robert Grillo has joined as head of business development, the Americas. He will be based in the US and lead CurveGlobal’s efforts to expand its Americas customer base. Grillo has 25 years’ rates experience including Bank of America Merrill Lynch, where he was head of FICC e-sales and global head of institutional rate sales and JP Morgan where he was head of the FIG rates sales group.

Ross said in a statement: “CurveGlobal continues to see strong growth with peak total open interest this month up 2.6 times compared to January 2019.”

The derivatives venture celebrated its three-year anniversary last year as it launched in September 2016.

“The enthusiasm for CurveGlobal has increased and is more than it was three years ago,” added Ross. “We are more confident about our ability to affect real change and increase the number of people connecting.”

Last month CurveGlobal completed a new funding round and introduced an uncapped pre-paid trading scheme. The “all you can eat” fee allows clients to execute an unlimited number of lots in any CurveGlobal interest rate derivatives products over a one-year or three-year period.

“We are not yet totally relevant for everyone and the next steps include expanding our product offering and increasing automation and integration,” added Ross. “We have already improved automation with smart order routers and some banks are auto executing.”

He continued that a surprise in the venture’s first three years was how long it took the industry to implement MiFID II, the regulation that went live in the European Union at the start of 2018 after a one-year delay. MiFID II extended best execution requirements from equities to other asset classes, including fixed income.

“A key part of MiFID II is providing opportunities for best execution,” said Ross. “Although CurveGlobal provides the best price in Sonia futures most of the time, we do not have the largest volumes.”

CurveGlobal introduced the first three-month Sonia futures contract in April 2018 and the first native intercommodity spread between Sonia and Libor-based contracts. The UK has chosen the sterling overnight index average, Sonia, as its risk-free rate to replace Libor.

Amir Khwaja, chief executive of derivatives analytics provider Clarus Financial Technology, compared the open interest in Sonia futures last year in an article on Risk.net. Khwaja said ICE had the largest share, £125bn ($162bn) or 78% of open interest, followed by CME with £21bn and then CurveGlobal with £15bn or 9% of open interest.

”Libor replacement is a fertile area for competition,” added Ross. “In the last three months of 2019 the industry has begun to prepare for the transition and that will accelerate in 2020.”

After the financial crisis there were a series of scandals regarding banks manipulating their submissions for setting benchmarks across asset classes, which led to a lack of confidence and threatened participation in the related markets. As a result, regulators have increased their supervision of benchmarks and want to move to risk-free reference rates based on transactions, so they are harder to manipulate and more representative of the market. The UK Financial Conduct Authority said two years ago that it will not compel panel banks to submit to Libor beyond 2021.

Ross said there are a growing number of bond issuers in Sonia and they are able to pay a lower rate as there is less transition risk.

“However there are parts of the market for which new term products need to be developed,” he added.

Khwaja wrote that the £160bn of total Sonia futures open interest at the end of last year was an increase from 4.5% to 8.3% of ICE short sterling.

Swaps Data: Have SOFR and Sonia swaps and futures lived up to expectations? https://t.co/HwJ6JMcagv pic.twitter.com/HNxfPdO9kM

“There’s no doubt risk-free rate derivatives volumes have been increasing over the past year, as an eight-fold jump in SOFR futures open interest attests,” said Khwaja. “But in some of the most established RFR markets – for example Sonia swaps – growth has stalled, particularly at the long end.”

The US has adopted the secured overnight financing rate, SOFR, as its risk-free rate to replace US dollar Libor.

Khwaja also noted that there is little sign of a slowdown in Libor-linked swaps activity that mature beyond January 2022, the benchmark’s assumed end date.

“As the clock counts down, the switch from Libor to RFR contracts may need to accelerate to embed those rates in the new landscape,” added Khwaja. “The year ahead will be critical, with some pivotal events to watch out for – not least in October, when CME and LCH change their discounting curve from Fed funds to SOFR for all US dollar swaps.”

In September this year the next phase of the initial margin rules will come into force. As a result, more asset managers will fall under the regulations and need to post initial margin for uncleared derivatives. Ross said the margin rules provide a gentle tailwind for CurveGlobal.

“For instance, CurveGlobal futures are  included in OpenGamma, which is a powerful tool to make people aware of margin opportunities,” he added.

CurveGlobal clients can also reduce their margin requirements by crossing margin on futures traded at the venue with futures and over-the-counter swaps cleared at LCH, the London Stock Exchange’s clearing house.

“We can sell portfolio margining but in order to win trades we need to compete on price, liquidity, automation and infrastructure,” said Ross.

He continued that in three years’ time CurveGlobal will still be challenging the status quo.

“We will continue to add value to a wide range of customers by providing competition in market data, fees and changing market structure,” added Ross.

Merry Christmas from the CurveGlobal team!
YTD there has been an increase of ~1.74x in volume traded in STIR lots on CurveGlobal compared to the same period in 2018. #futurestrading pic.twitter.com/mFe5lYITmH