China has agreed to deals with Deutsche Börse Group and Euronext as it internationalizes the renminbi ahead of the International Monetary Fund’s coming review of currencies in the Special Drawing Rights basket, which could lead to changes in global asset allocations.

The Shanghai Stock Exchange, Germany’s Deutsche Börse and China Financial Futures Exchange said in a statement today they have founded a joint venture, the Frankfurt-based China Europe International Exchange. Ceinex will be the first dedicated platform for authorised RMB-denominated trading outside China when it launches on 18 November 2015.

The new market will offer investment products based on Chinese underlyings to international investors, starting with cash market products such as exchange-traded funds and bonds which will be tradable on Xetra, Deutsche Börse’s cash platform.

Gui Minjie, chairman of SSE, said in a statement: “Ceinex will perform a pivotal role in the course of opening up the Chinese capital markets and increasing RMB internationalization.”

Euronext, the pan-European exchange operator, also said today that it has received approval from the Hong Kong Securities and Futures Commission to provide automated trading services to Chinese brokers and futures companies domiciled in Hong Kong so they can easily access the European derivatives market. 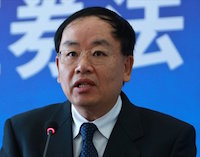 These moves come ahead of the IMF’s review of currencies in the SDR basket which is due before the end of this year. SDR is an international reserve asset created by the IMF in 1969 to supplement its member countries’ official reserves.

The IMF reviews the SDR basket every five years to ensure that it reflects the relative importance of major currencies in global trading and financial systems. The basket currently consists of four currencies – US dollars, euros, sterling and Japanese yen – whose exports of goods and services had the largest value over a five-year period. They have also been determined by the IMF to be freely usable, or widely used to make payments for international transactions and widely traded in the principal exchange markets. At the last review in 2010 the RMB met the export criterion but was not deemed to be freely usable.

Aidan Yao, senior emerging market economist at AXA Investment Managers, said in a report in June there is a greater-than-even chance for the RMB to be included in the SDR this year.

Yao said the immediate impact of SDR inclusion will be limited for China’s financial markets but could serve as a powerful endorsement for the RMB’s international and reserve currency status. “Such a stamp of approval from the IMF could, in turn, trigger a significant, albeit gradual, reweighting of the entire global reserve portfolio, which currently stands at just under $12 trillion,” he added. “Non-public investors could follow, if not lead, the official flows into the RMB, as China’s capital markets develop and liquidity improves.”

Julien Calavia, hedge funds analyst at Aberdeen Asset Management, said in a blog this week that if China is successful in its aims, this could result in attractive new macro trading opportunities for hedge funds.

Calavia said: “Membership of the SDR basket is largely symbolic and neither necessary nor sufficient for the renminbi’s acceptance as a global reserve currency. But it is seen as a vital stepping stone on the way to China’s currency aims.”

He added that Chinese authorities have also recently announced the extension of onshore renminbi trading hours in China to ease IMF concerns on renminbi liquidity during UK trading hours as the foreign exchange value of SDR basket currencies is calculated at noon in London.

“The capital account opening will be a key element for hedge funds to capture direct opportunities,” added Calavia. “This will result in a more freely accessible onshore equity market and the onshore bond and derivatives markets will become available to foreign investors for the first time. Moving closer to a fully-floating exchange rate mechanism would increase currency trading opportunities as price moves wouldn’t be constrained within the current +/- 2% band.”

CME Group’s European exchange said this month it could offer offshore chinese renminbi futures contracts with physical delivery in London, rather than Hong Kong, for the first time. The move is supported by China Construction Bank which also intends to participate in the London Silver Pricing, administered by CME Benchmark Europe, and facilitate the trading of CME Group products for CCB’s customers in China.

William Knottenbelt, head of international at CME Group, said in a statement: “The ability to transact during London hours is of paramount importance to those institutions who value flexibility in managing their positions in markets where prices can move sharply in short periods of time.”

This month during President Xi Jinping’s first state visit to the UK, China Construction Bank listed an offshore RMB bond on the London Stock Exchange and became a member of the exchange.

Wang Hongzhang, chairman of CCB, said in a statement: “In the wake of a first RMB-denominated money market ETF listed in London early this year, CCB’s RMB bond listing and CCB London Branch’s LSE membership are additional milestones in CCB‘s global development. We look forward to ongoing collaboration with the LSE to make further contributions to the internationalization of the RMB.”

In the same week in London the Agricultural Bank of China listed the first international green bond issued by a Chinese bank.