Financial Services Warms Up to AI

Long the stuff of futuristic sci-fi movies, artificial intelligence has been conceptually interesting to Wall Street for some time, but not in a way that gets anything more than token budget.

That’s starting to change. Machine learning has reached critical mass in terms of high performance at reasonable cost, some observers say. As a result, financial services firms are increasingly positioning themselves to get out ahead of the conceptual becoming practical.

“We’ve been looking at the artificial intelligence space for some time now,” said Josh Sutton, managing director at Publicis.Sapient. “We believe that it is going to be one of the most transformative technologies that will impact financial services in recent history, and potentially even our lifetimes.”

The global market for smart machines is expanding by almost 20% annually, according to Industry estimates, and spend on business applications and services employing AI could reach $260 billion by 2018. These are attractive numbers for financial-services professionals, as the markets business has overall not been a growth area over the past half-decade. 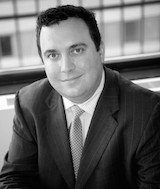 Publicis.Sapient ‘buckets’ AI platforms into three main categories: ‘big data’ tools, which enable humans to draw conclusions from massive amounts of connected and correlated data; correlation-based platforms such as IBM Watson and Google Deep Mind, which analyze large sets of data to determine patterns and where individual data points have been statistically relevant; and causal-based platforms such as Lucid, which apply an understanding of how humans think to problem sets.

“The three categories of tools collect the data, answer ‘what’, and answer ‘why’,” Sutton said.

By way of background, Sutton noted that AI first appeared in the 1970s and 1980s when pioneers such as Alan Kay, Doug Lenat and Marvin Minsky conceptualized different means to simulate human intelligence and technology.

One school of thought was to create algorithms and apply them to large graphs of knowledge to simulate the human decision-making process; the other held that to teach something to think like a human, it needs to be taught like a human, i.e. from the ground up.

“Those two historical approaches evolved into the correlation and causal-based buckets of AI as we view them today,” Sutton said. “The correlation-based set of tools is very robust and powerful right now, as it’s leveraging the enhancement in processing power to finally start delivering on some of the promise of what was envisioned 30 years ago. We’re starting to see real results here, as people are able to take some of the big data platforms and identify and find real meaningful correlations, and create some very compelling analysis of what is causing things to happen.”

“Watson, or any of the correlation-based tools can do a great job at identifying correlations between different activities, different conversations that are happening in a firm, and trades that are happening,” Sutton continued. “The causal-based tools can assess the ‘why’. Is this something where people are making trades based on getting advice from normal sources, or is this insider trading activity? Is this ethical or not ethical?”

While artificial intelligence is not a new concept in financial services, the change is that the demand setting is being dialed up from a low simmer.

“There’s an upsurge in interest,” said Tom Davenport, a management and information technology professor at Babson College who has researched AI. “There have been algorithms on the trading side for several decades. Now, some of the newer Watson-type, or natural-language technologies, let you look more at things happening in the outside world that might have some impact on financial outcomes. You see some interesting applications of those technologies, particularly in places like hedge funds.”

As a near-term project, Publicis.Sapient is engaging with large global banks to understand how their business may be impacted by artificial intelligence over the next two to five years, so they can prioritize their investments in the space. More broadly, Sutton said “we will be focused on helping firms in financial services and other industries understand how to leverage and apply AI platforms in their organization to drive increases in the revenue, reductions in cost, and minimize risk.”