The discussion about risks arising from automated trading, which was already underway, has received a fresh boost with the Nasdaq ‘flash freeze’ of Thursday, August 22, 2013.

Early that afternoon, Nasdaq OMX became aware that price quotes were not being disseminated by the Securities Information Processor (SIP), which consolidates and disseminates all prices for the industry, according to a statement by Nasdaq.

“There was a connectivity issue between an exchange participant and the SIP, which led to degradation in the ability of the SIP to disseminate consolidated quotes and trades,” the statement said. “The cause of the issue has been identified and addressed.”

New rules proposed by the U.S. Securities and Exchange Commission will require market participants to have comprehensive policies and procedures in place surrounding their technological systems.

The rules—called Regulation Systems Compliance and Integrity (Regulation SCI)—are set to formalize and make mandatory many of the provisions of the SEC’s Automation Review Policy.

SEC chair Mary Jo White said that Reg SCI will be expedited, and that she would convene a meeting of the leaders of the exchanges and other major market participants to accelerate ongoing efforts to further strengthen markets.

“The continuous and orderly functioning of the securities markets is critically important to the health of our financial system and the confidence of investors,” said White. “Today’s interruption in trading, while resolved before the end of the day, was nonetheless serious and should reinforce our collective commitment to addressing technological vulnerabilities of exchanges and other market participants. The Commission is determined to enhance the safeguards necessary for strong market systems.”

Responding to the SIP issue, in order to protect the integrity of the markets, Nasdaq OMX issued a regulatory halt for all trading in Nasdaq-listed securities. In the first 30 minutes, technical issues with the SIP were resolved. For the remaining period of time, Nasdaq OMX, other exchanges, regulators and market participants coordinated with each other to ensure an orderly re-opening of trading in Nasdaq-listed securities. Trading resumed and the balance of the trading day finished in normal course.

“We stopped the market because we wanted to make sure that all investors were protected,” Nasdaq chief Bob Greifeld told Bloomberg TV. “So what happened is that we consolidated the data for the 13 exchanges. As soon as we saw that that had an issue, our first concern was the proprietary firms, high frequency firms, had access to data directly from exchanges. So it was information asymmetry. We halted the market because of that. We quickly identified the problem and quickly solved it.” 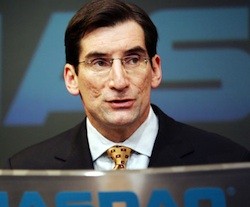 Over the past two decades, U.S. securities markets have experienced a remarkable evolution from a collection of a few markets that were mostly manual to today where there are a broad variety of many more trading centers that are almost all completely automated and dependent upon sophisticated technology and extremely fast, interconnected systems.

This, combined with the increased speed and capacity of automated systems, has contributed to an impressive surge of trading volume and message traffic.

The question of ensuring that there exists a backup plan is sure to come up over the next several weeks.

“Improve your defensive driving, to make sure no matter what happens the systems stays up and has a resiliency and robustness that we did not exhibit yesterday,” said Greifeld. “What happened here and something that the industry needs to think of, there is 13 competitive exchanges, us and the others worked well yesterday. There is one single SIP which consolidates and disseminates the market data. So the industry has talked for years should there be a competing SIP and we support that concept.”