Gary Gensler, chair of the US Securities and Exchange Commission, said the US regulator needs to focus on reforming fixed income markets as they become increasingly electronic, which has implications for financial stability.

“In America, we turn more to the bond market than to banks,” he added. “Given the size and importance of these markets, it’s worth asking how we can modernize our rules for today’s economy and technologies, so these markets can be as fair as possible for investors and as efficient as possible for issuers of all types.”

He gave his speech, The Name’s Bond, at the City & Financial Global’s City Week 2022 conference in London which is marking the 60th anniversary of the first James Bond film this year.

It’s bright and early, but if you happen to be awake, tune in to list to my remarks at London City Week. https://t.co/AkxxnNRVLE

Gensler highlighted that trading in fixed income markets is becoming increasingly electronic, which has been accelerated by the Covid 19 pandemic and that ownership has been shifting to registered investment companies and mutual funds.

“This shift raises challenges for financial resiliency,” he added. “Given these trends and the sheer size and importance of fixed income markets, I think we should focus on how we can make improvements.”

The SEC wants to improve transparency and enhance resiliency. More post-trade transparency would mean making the details of individual transactions, such as price and the spread to the underlying markets, available in real-time or near real-time to when the trade is executed.

“Post-trade transparency promotes liquidity and helps investors and issuers,” said Gensler. “As Adam Smith noted in The Wealth of Nations more than 200 years ago, the whole economy benefits when the price of information is lowered, or information is free.”

He continued that academic researchers have overwhelmingly shown that post-trade transparency improves efficiency and competition in markets.

“The information reported to these systems, though, has not kept pace with changes in our markets and with technological advances,” said Gensler.

One area he highlighted is that fixed income trades must currently be reported as soon as practicable, but no later than 15 minutes after execution. He asked: “Why couldn’t the outer bound be shortened to no later than, for example, 1 minute?”

Another improvement could be to add foreign sovereign bonds into Trace, the US bond reporting system.

“The European Union debt crisis and, more recently, Russia’s invasion of Ukraine have shown the value that regulatory reporting and public dissemination of foreign sovereign bond pricing would offer,” he added. “Finra has already consulted its members on this possibility so I hope to see a filing soon.”

Gensler said it may also be time for Finra to consider allowing the public to see reported Trace details of individual Treasury transactions.

“Once more major firms have reporting requirements — the banks and potentially principal trading firms in the future — I think it could make sense to disseminate this information to the public,” he added. “Public dissemination of Treasury trade data could help enhance counterparty risk management and the evaluation of trade execution quality. It also could expand the provision of liquidity.”

Two other possible improvements might be reporting on the trading protocol and platform fees paid to do a trade, and the spread relative to Treasuries, when that is the agreed-upon term of trade. “Finally, as part of the overall effort to improve post-trade transparency on Trace, I think it would be helpful for Finra to consider codifying their existing dissemination protocols,” said Gensler.

I’ve asked staff to look for opportunities to help ensure that our bond markets are more resilient.

In addition Gensler thinks it is important to consider revising SEC rules to reflect the increased use of fixed income electronic trading platforms. 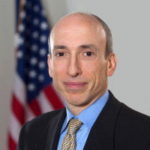 “I have asked SEC staff to consider how we might enhance market integrity, access, and pre-trade transparency,” he added.

In January the SEC proposed a new definition of an exchange that would cover fixed income platforms and staff are considering ways to promote fair access so benefits of these systems are more widely available to investors.

“Many SEC Commissioners over the years have identified pre-trade transparency on platforms as a key area of possible improvement in the fixed income markets,” he added .

Gensler continued that the 2008 global financial crisis showed that fixed income markets, such as mortgage-backed securities, have broader implications for the financial sector and the real economy. In addition, the start of the Covid crisis also raised issues of financial stability as there were significant investor outflows in March 2020 and there were challenges trading US Treasuries.

“We are in the midst of uncertain geopolitical trends and central banks are starting to transition from an accommodative to a tightening policy stance,” he added. “We don’t want markets to be exciting for the wrong reasons.”

The SEC has a number of ongoing resiliency projects related to fixed income markets. For example, the regulator recently voted to propose amendments to rules governing money market funds to enhance their resiliency in short-term funding markets.

“In addition, I’ve asked staff for recommendations around strengthening central clearing of Treasuries for both cash and repps,” he added. “This could include sponsored clearing, enhanced risk management at clearing houses and broadening the scope of central clearing.”

In March the SEC proposed that proprietary trading firms and others that engage in certain liquidity providing activities register with the regulator as dealers.

In addition, the SEC has proposed shortening the settlement cycles for securities from T+2 to T+1 and this will apply to many fixed income markets, as well as equities.