A new high-speed fiber route has opened up to provide quicker access to the burgeoning Russian financial market.

The link, which has been established by technology vendor TMX Atrium between Moscow and Stockholm, will provide access to key data centers in the Russian capital.

It will also shave off crucial milliseconds between the main European financial hub of London and Moscow. Previously, traders in London wanting to access Russian markets had to use fiber-optic cables via Frankfurt in Germany. Now, high-frequency traders will be able to cut the time between London and Moscow to around 40 milliseconds by going on a more direct route via Stockholm. New fiber optic cables were laid between London and Stockholm last year. TMX Atrium says the Stockholm-Moscow leg will have a latency of 17.7 milliseconds.

The access point is at Moscow’s M1 financial district, where the main Russian exchange, Micex-RTS, will be basing its data center for its securities markets. Micex-RTS, which used to be two separate Moscow exchanges, completed a $4.5 billion state-backed merger in December last year to form a single Moscow exchange and has rebranded itself as the Moscow Exchange in a bid to open itself up to more foreign investors. The exchange has also seen an increase in recent times of high-frequency trading activity. 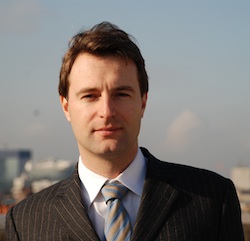 “We are delighted to offer a new low-latency route into and out of Moscow to enable investors to exploit this emerging market and benefit from arbitrage opportunities,” said Emmanuel Carjat, managing director of TMX Atrium, which is owned by Canadian exchange operator TMX Group.

TMX boasts as clients many of Europe’s leading high-frequency firms and they will be looking to use the new link to exploit arbitrage opportunities between the London Stock Exchange’s International Order Book (IOB), which offers direct access to securities via depository receipts from 46 countries including Russia, and those listed on the underlying exchange in Moscow. The IOB is the largest market in Russian instruments outside of Moscow, with shares in Gazprom, Lukoil and Rosneft commonly its most traded stocks.

The Micex-RTS exchange is also well developed, despite it being based in an emerging market, and the Russian economy, which has so far managed to escape the worst of the nearby eurozone sovereign debt problems, is seeing GDP growth levels at almost 5% with record-low inflation and unemployment levels. Investors, understandably, are becoming attracted to this apparent success story.

The Micex-RTS exchange is in the process of trying to shake off the perception in Europe of it being a specialist and hard-to-access market by upgrading its IT infrastructure and processes and the exchange sees itself as becoming a major international financial hub in the coming years.

“Each IT project of the Moscow Exchange aims at improving the quality of its services, enhancing reliability and availability of its infrastructure,” said Artak Oganesyan, deputy director for business development at EPAM Systems, a central and eastern European software provider.

Carjat at TMX Atrium added: “With the move of the Russian securities markets to T+3 settlement later this year, we will undoubtedly see additional liquidity and a continuing need for connectivity into Russia.

“Our venue-neutral platform is designed to enhance and add supplementary routes as clients demand to provide access to multiple markets, regions and venues to trade the full range of asset classes. We recognize that our client base wish to execute arbitrage strategies between key data centers and, in line with our expansion strategy, we will continue to refine our connectivity capabilities to match these demands.”

TMX Atrium, which currently operates in 10 European countries as well as the U.S. and Canada, is also planning to plug into the emerging market of Brazil where its high-frequency trading clients will hope to benefit from its less sophisticated markets compared to Europe and North America.

The TMX Atrium network connects investors with key market infrastructure, such as exchanges, clearing houses, central securities depositories and data suppliers. It connects 25 trading venues–including NYSE Euronext, Nasdaq OMX, CME Group and Bats Chi-X Europe–and 300 end data points. The low latency provider has benefited from the rise of algorithmic trading and the fragmentation of global markets by offering its clients access to many markets through its co-location services and high bandwidths.