Icap, the inter-dealer broker and provider of post-trade risk mitigation services, launched Euclid Opportunities in March 2011 to offer a seed funding and acceleration program to early-stage financial technology companies in the areas of post-trade risk management or data and other institutional financial market applications.

Gibson told Markets Media that Icap had two drivers when launching Euclid. “The market was looking for more efficient ways of operating and there was an emerging breed of tech companies with models, expertise and methods that could help clients significantly increasing operational capabilities by allowing firms to reduce risk and cost,” he added.

Since 2011 Euclid has made six investments, some of which are undisclosed.

“There is an industrial fintech revolution as firms move from legacy systems to lighter technology that is more effective, agile and flexible,” continued Gibson. “Many firms are going through a once in a generation review of their technology and that creates the opportunity to provide clients very significant value.” 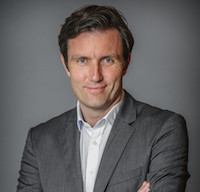 Last month Euclid put more funding into Duco, a London-based fintech provider of hosted reconciliation services, after initially investing in 2012. Duco Cube has reconciled more than one billion transactions in the last 12 months according to the firm.

Gibson said: “The management are great human beings, have Ph.Ds in computer science and have developed a technique for matching and processing data. Duco is being used by 28 clients and our aim is now to help the platform go global.”

Christian Nentwich, chief executive and co-founder of Duco, said in a statement: “Post-trade infrastructure is undergoing fundamental changes, and this investment will enable us to build further international scale and enter multiple industry segments in the capital markets.”

Colin Coleman, chief executive and founder of Abide Financial, said in a statement: “This investment contributes to a crucial growth stage of Abide and helps us scale operations at a faster rate.”

Icap will be a client of Abide Financial as the firm will manage Icap’s MiFID, Emir and Remit reporting obligations.

“It is not a prerequisite that our investments are used by Icap but it is a good outcome if they add value to Icap,” added Gibson. “They have to go through an independent third-party assessment at Icap and are subject to the same rigour and diligence as any other.”

Other Euclid portfolio companies include Enso Financial, a New York-based firm providing hedge funds and asset managers with portfolio reporting and data analytics services; OpenGamma, an open platform for analytics and risk management for the financial services industry; and AcadiaSoft, which is developing a hub to centralize margin processing as new regulations requiring the exchange of margins on over-the-counter derivatives for the first time will come into force from September 2016.

In July Euclid invested in AcadiaSoft alongside the DTCC, Euroclear and four banks which took the total bank investors to 13. AcadiaSoft is linking its MarginSphere electronic messaging service for OTC derivatives with Icap TriOptima’s OTC trade reconciliation service and the margin transit utility operated by the DTCC-Euroclear joint venture in order to create an end-to-end margin processing hub for non-cleared derivatives across the financial industry.

There are currently many financial technology initiatives focussing on virtual currencies and distributed ledgers built on blockchain technology. Gibson said Euclid is spending some time looking at blockchain and there are some interesting initiatives.

There is expected to be an increased adoption of blockchain technology in capital markets and a steady increase of IT spending in the space over the next five years according to a report from consultancy Aite Group in September.

Sang Lee, co-founder of Aite Group and managing partner, institutional securities & investments research director, said in the report: “Weighing the inherent benefits of blockchain against its adoption challenges, blockchain technology will prosper first in markets that are less automated, less regulated, and less heavily traded but with high clearing and settlements risks.”

Gibson said: “If the market chooses to adopt central record keeping it will require significant re-engineering of business processes and that is a long term-project. There could be some early wins for blockchain in precious metals or illiquid asset classes but there needs to be absolute agreement for practices to change and everyone will have to move as a collective.”

So far, Euclid has not suffered the failure of a portfolio company. “We want every company to be successful and will work with them closely,” added Gibson. “We are steering a good path but you cannot make early stage investments and not have setbacks at some point.”