IT IS SAID THAT it’s not what happens to you in life that’s most important, rather it’s how you respond to it. By that measure, former Knight Capital CEO Tom Joyce earns a win­ning grade.

Getco purchased Knight Capital in July 2013, six months after announcing the deal. Four months prior to that, in August 2012, Knight lost $440 million in 30 minutes due to a software glitch that sent scores of automated orders into the market that weren’t meant to be executed. 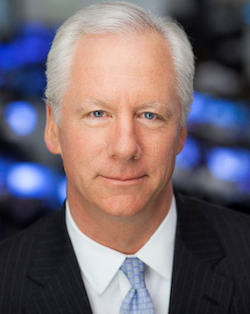 To be sure, as the head of Knight, Joyce was ultimately accountable for the com­pany’s near-death experience. At the same time, our era of high-speed electronic mar­kets has shown that technological problems plague all market participants and market operators at one point or another, and even the best systems and controls can only reduce, not eliminate, the risk.

Rather than taking cover behind PR people and deflecting blame, Joyce drew acco­lades for handling the aftermath of the tech failure in a direct, stand-up manner. And more importantly, he lined up rescue fund­ing in the critical first days after the incident, ultimately enabling Knight to survive and avoid bankruptcy and a potentially chaotic, market-disrupting and confidence-sapping unwinding of positions.

“I think the finest hour was rescuing Knight after the trading error,” Joyce told Markets Media in a Jan. 21 telephone interview. “It was one of the most successful financial-services rescues I’ve ever seen.”

Joyce recalled that on Aug. 1, the day of the tech breakdown, he was home recover­ing from a knee operation. After a colleague called to tell him the news, he had his wife drive him to the office, where he lived for five days. The crisis management entailed trying to keep counterparties trading with Knight and maintaining a dialogue with regulators, shareholders and the news media, all while arranging the funding that would ensure the company could stay open.

On Sunday Aug. 1, Knight raised about $400 million of funding from a half-dozen investors, led by investment bank Jeffer­ies. “We recapitalized the firm in 48 hours,” Joyce said. “It was a great comeback story.”

“I think if history has taught us anything, the best way to handle a crisis is to handle in a transparent fashion, to be out in front and let people understand what happened. I think that engenders a lot of good will,” Joyce said. “I think people were kind of rooting for us, and the tone was that the industry would be a lot better off with Knight than without Knight.”

Joyce, 58, left the company last July after the Getco purchase closed and the com­pany was renamed KCG Holdings. He said he’s currently playing a lot of golf, while con­sidering future opportunities, possibly in a chairman or advisory capacity for a firm in the electronic-trading or private equity space.

An almost-30-year veteran of the securities industry, Joyce became CEO of Knight in 2002, after equity-trading leadership stints at Sanford C. Bernstein and Merrill Lynch. A Harvard graduate, Joyce started his career as a retail stockbroker.

Joyce said another significant career accomplishment was circa 2005, when Knight was still operating its market-making business with a hybrid model of automated and manual trading, and “the world was just passing us by.”

“We embraced trading technology and fully converted throughout the organization, into a headwind of cultural push-back,” he said. “We hired a team of high-quality developers and quantitative analysts, helping them by giving them guidance as to where to focus and how to use resources wisely. The con­version was, thankfully, widely successful, and a couple months later we were making money on a regular basis.”

Joyce said he also took pride in help­ing transform Knight’s culture from cow­boy traders who were most interested in their own earnings, to a client-driven organization.

Concluded Joyce, “I’d like to be known as somebody who always tried to do the right thing under all circumstances, embraced innovation, and hopefully made a differ­ence in the lives of some of the people I have touched.”