Liquidnet is preparing to launch a dark pool model to enter into fixed income as the firm had a record first quarter performance in Europe on its equities block trading platform.

Mark Pumfrey, head of Emea at Liquidnet, told Markets Media: “In fixed income we are developing a dark pool blotter sweeping model. We have been, and continue to be, in discussions with our buyside members on how to create a successful fixed income electronic market, which has eluded the industry for years.”

Asset managers have found it increasingly hard to trade large blocks of corporate bonds as banks have reduced their balance sheets following the financial crisis and regulators have forced them to hold more capital. Many new corporate bond trading platforms have been launched to try and solve this problem.

A report from consultancy GreySpark last month said there are already at least 33 live electronic corporate bonds trading platforms, and at least another eight are in various stages of pre-launch development. “The majority of the new trading platforms discussed in this report will no longer be trading in three years time,” added Greyspark.

The Desk’s ‘Trading Intentions survey 2015’ asked 24 buy-side firms which liquidity aggregation systems they currently use for trading corporate bonds, which they preferred, which they planned to use and how their use might vary over a five-year period. In the survey Liquidnet had the highest proportion, 58%, of respondents planning to move to its fixed income platform.

“The Desk survey found that we were the number one prospective venue that asset managers wanted to connect to based on four key requirements,” added Pumfrey. “We will offer buyside-to-buyside crossing, automatic blotter scraping, an independent ownership structure and independent clearing and settlement.”

In equities, Liquidnet said that the first three months of this year were a record quarter for Emea in local currency. Average daily liquidity rose 12% year-to-year to $22.7bn and average execution size was $1.64m, up 31% over the same time period. In addition, there was a 17% quarter-on-quarter increase in blocks of shares worth $10m or more. 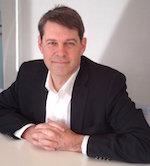 ‘We have had extremely strong growth on our platform of a compound rate of 44% in the two years since the beginning of 2013,” said Pumfrey.

Increased volumes in the first quarter were due to the addition of more buyside members, record levels of Interest from US investors in European equities and a record quarter in emerging markets where principal trading was 80% more than in the first quarter of last year. “That is one area where we would like to expand further as our clients are crying out for quality liquidity in these markets,” said Pumfrey.

Pumfrey added: “95% of our business is under the large-in-scale waiver and so we will largely be unaffected by the dark pool volume caps.”

MiFID II also puts more emphasis on unbundling and best execution which Pumfrey claimed will boost Liquidnet. “The buy-side is going to change its game significantly and use more independent trading cost analysis and venue analysis to prove best execution on a forensic basis,” he added.

“The market does not yet know how CSAs will work under MiFID II,” Pumfrey said. “Over the next five years more content is likely to be purchased from fund managers’ own P&L but they will still need to manage their commissions and our commission management system does not depend on the use of CSAs.”

Rob Laible, global head of EQS at Liquidnet, told Markets Media at the time: “A focus for growth is quantitative analytics as we are investing in this space while other firms have pulled back since the financial crisis.”

In December last year Liquidnet launched the EQS group with three hires in New York to provide its network of more than 780 asset managers with new and more efficient ways to source liquidity in its own pool as well as at other external venues. The team is responsible for designing, implementing, and customizing Liquidnet’s execution algorithms and analytics and providing quantitative research and advice on market microstructure.

Laible said: “Liquidnet’s edge in algos is that our clients can start out using our dark passive algos which allows them to search for block liquidity in our pool first. One of our strengths is that our trading desk can help the client manage the transition from passive algos to lit markets as the day goes on.”