The European Securities and Markets Authority said MiFID II has not met its objective of reducing the cost of market data for users and also recommended the establishment of a real-time consolidated tape for equity instruments across the region.

The European Union regulator acknowledged that the establishment of an EU real-time consolidated tape for equities is technically demanding and will require a substantial investment of both time and resources by all parties involved, including a need to change the legal framework.

Tim Cant, financial regulation partner at law firm Ashurst, said in a email that access to market data continues to be a sore point for regulators.

“MiFID II did not achieve the aspirations of cheaper and more widely dispersed data, and the idea that a private sector consolidated tape would emerge was optimistic thinking,” Cant added. “Any consolidated tape solution will not be easy to achieve, given remaining data quality and access issues.”

Rebecca Healey, co-chair EMEA regional committee and EMEA regulatory subcommittee at FIX Trading Community and head of EMEA market structure and strategy at Liquidnet, told Markets Media: “There will be operational challenges but the first step is to ensure FIX MMT typology is used in a standardised manner in equities by market participants. There has been progress and we are 90% there.”

The MMT (Market Model Typology) initiative is a collaborative effort established by the broad range of industry participants in FIX to develop consistent standards for post-trade data across all asset classes subject to the MiFID II regulations.

Healey continued that there has been a sea-change as legislators want European capital markets to more similar to the US.

“Having had a number of conversations within Esma and the European Commission, we are seeing a real political will for a consolidated tape to be delivered,” she added. “Access to good data for end investors is being seen as critical to the delivery of CMU 2024.”

The European Commission’s flagship Capital Markets Union project wants the region to become less dependent on bank lending; increase the pools of capital available in the region for financing the growth of smaller companies; and provide savings for retail investors.

Huw Gronow, co-chair EMEA investment management subcommittee, FIX Trading Community and head of dealing at Newton Investment Management said at the meeting that a post-trade tape is necessary to give the buy side an accurate view of what has been traded and what liquidity is not accessible so they can plan executions with confidence.

“The buy side currently has to work with data that is not standardised and continues to be inconsistent,” he added. “Accuracy is extremely important for portfolio construction and to assess the impact of executions on alpha.”

Cathy Gibson, head of dealing at Royal London Asset Management, said at the meeting that a consolidated tape will bring more transparency and cheaper data. She said: “However, regulators should realise that best execution does not just equal best price.”

In October the International Capital Market Association, a trade body, said a low or minimal cost consolidated tape of raw transaction data would benefit the cash bond market in the European Union.

The latest Quarterly Report is now published and available on the @icmagroup website. It covers a wide range of market topics -the risks of global capital market fragmentation including Brexit, the Common Domain Model and benchmark reform. Read more here https://t.co/hNA58sPDXo pic.twitter.com/WH7BRaRmLt

The trade body’s response said a cash bond consolidated tape should be the  “golden source” for reliable, trustworthy, good quality post-trade data in the market. As a result, market participants would benefit from robust transaction cost analysis and improving best execution analysis.

“The greatest benefit of a European cash bond consolidate tape is the protection it would provide for smaller or retail investors who may not have (or be able to have) access to several systems or the ability to pay for an aggregator,” added ICMA.

The trade body continued that it will produce a discussion paper for the European Commission on a cash bond consolidated tape and meetings are taking place to present early findings to regulators.

“The buy side wants more reliable post-trade data and FIX is in the process of setting up a separate working group to look at the specifics for a fixed income consolidated tape,” she added. “The first meeting is scheduled for the New Year and FIX is actively seeking participant from fixed income specialists.”

She continued that is important that the industry gets ahead of future regulatory requirements rather than waiting to be mandated. “That’s the best way to ensure industry can implement the regulation successfully,” said Healey.

The Association for Financial Markets in Europe welcomed Esma’s report which it said recognised that the overall price of market data has increased and that pricing is not typically based upon the costs of producing and disseminating market data.

AFME welcomes @ESMAComms’s recognition that the overall rising price of market data is not typically based on its production and distribution. Read our full response: https://t.co/6lJU1bVvqa#MarketData #MifidII https://t.co/K8tLnKhG0O

Sean Barwick, associate director of equities at AFME, said in a statement: “Increased transparency requirements will help market participants and regulators to scrutinise pricing structures meaning that market data should be charged on a ‘reasonable commercial basis’, as required by MiFID II. We look forward to working with policymakers and regulators to ensure that Esma’s proposals on market data are implemented and AFME looks forward to contributing to further dialogue on the establishment of a consolidated tape.”

Esma said in its review that MiFID II, has not met its objective of reducing the cost of market data charged by trading venues and approved publication arrangements (APAs). 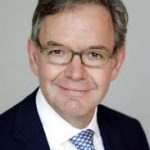 Steven Maijoor, chair of Esma, said in a statement: “Access to market data is becoming increasingly important for securities markets and it is important that data users know what they are paying for. Esma will therefore provide further guidance on the cost of market data.”

MiFID II requires venues and data providers to publish market data on a “reasonable commercial basis”, provide market data in a disaggregated format, and to make market data available free of charge 15 minutes after publication with the objective to lower costs.

However, the report said data users and trading venues continue to disagree as to whether the price for market data is reasonable.

Trading venues and APAs told the regulator that overall prices of market data have been stable since the application of MIFID II.

“While trading venues and APAs acknowledge that the prices for some products have increased, they stress that at the same time other services have become less expensive,” said the report. “In particular, trading venues consider that the provision of disaggregated products allow customers to purchase only selected parts of the data for a price lower than the package.”

However market data users said prices have increased significantly since the application of MiFID II with the most significant increases related to non-display use and the use of data by systematic internalisers. 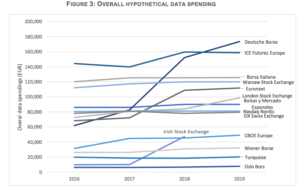 Esma compiled the yearly expenditure of a hypothetical firm on market data for different trading venues between 2016 and 2019.

Healey said: “Some of the resistance to the development of a consolidated tape initially is clearly based on vested interests optimizing business models to maximise commercial opportunities, but regulators and policy makers are starting to look beyond tech and data financial services providers to consider how data is used in other industries.”