European Union regulations have increased research unbundling in the US according to Sandy Bragg, principal at consultancy Integrity Research.

MiFID II came into force in the EU at the beginning of last year and requires fund managers to either pay for research themselves or set up a research payment account, where the budget has been agreed with the client.

Bragg said in an email to Markets Media that there is more unbundling in the US as a result of MiFID II, but it is occurring in the context of research costs funded with client commissions. 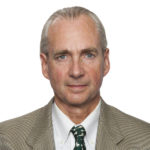 “Because most global asset managers have ring fenced their MiFID II obligations, they are now flowing 100% of their US equity trading through commission sharing agreements, which segregate trading costs between an execution component and a research component,” he added. “This helps them sort out what costs are associated with MiFID II.”

In Europe most asset managers have opted to pay for research themselves and this has led to a drop in research budgets.

Integrity Research’s fourth benchmark study of research pricing found that average European research payments were $25,000 in Europe and $31,000 in the UK. These are both lower than the average Asian payment of $35,000 and $42,500 in North America according to the study. Bragg added that, irrespective of whether research costs are absorbed, global asset managers have been using more granular interactions data to tighten the fees paid to brokers. 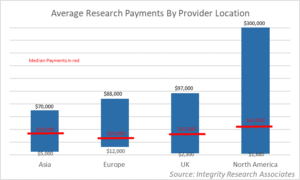 Michael Mayhew, founder of Integrity Research, said in a statement: “Our latest research pricing benchmarks showed significant impacts from MiFID II along a variety of metrics. Those impacts are less potent outside the EU, but still notable.”

The Integrity study continued that investment banks have assigned subscription fees to written research, often at a low price, to meet MiFID II requirements. However, they have also been charging premium fees for services such as access to analysts.

“The banks’ pricing strategy seems to have been largely successful based on Integrity Research’s survey results,” said the study. “Premium pricing for high touch services dominated maximum client payments, i.e. the most profitable relationships which were often seven-figure research payments.”

Bragg continued that although MiFID II has increased research unbundling in the US, it is still an open question whether American asset managers will follow their European counterparts in absorbing research costs. He added that a handful of US fund managers have adopted the policy but the US Securities and Exchange Commission has signaled that it will no longer harmonize US regulations.

In 2017 the SEC issued three no-action letters allowing US broker-dealers to comply with certain MiIFD II research payment unbundling requirements when they are doing business with European investment managers. Bragg said that when the current SEC relief expires next summer the industry will have to find workarounds to paying cash to US brokers for research, which is not allowed under US securities laws.

“This has put a damper on buy-side enthusiasm to absorb costs (which require cash payments),” he added. “It may still happen, but will require peer pressure because US asset owners seem largely indifferent and the US regulator is hostile to MiFID II.”

Bailey said the most notable shift has been that a vast majority of traditional asset managers have begun to pay research from their own revenues, instead of using their clients’ funds.

“The scale of this shift went well beyond our expectations in the summer of 2017, when surveys suggested two-thirds or more of buyside firms would continue to charge clients for research,” he added. “In conjunction, there has been robust discussion around the value and price of research as an embryonic market place emerges.”

Bailey continued that the market is going through a period of price discovery, and is probably yet to find an equilibrium.

The FCA has carried out a multi-firm review including asset managers, sell-side brokers, and independent research providers and Bailey said the findings suggest that the new rules are having a positive impact on the accountability and discipline of the buy-side when procuring research, and on the cost of execution.

“Dealing commissions have fallen – not only due to the removal of research costs, but also because managers are increasingly using more electronic, ‘low-touch’ channels,” he said. “Our work also largely confirms public reports that research budgets have reduced by around 20% to 30%.”

The FCA has estimated that the reduction in charges incurred by investors in equity portfolios managed in the UK was in the region of £180m (€233m) last year, so assuming similar savings going forward, this equates to nearly £1bn over the next five years.

Bailey stressed that buy-side firms have told the FCA that they can still access the research they need, although he admitted this may reflect the low ‘entry level’ prices for written research.

“Importantly, very low pricing also raises competition questions about the future of a sustainable and diverse research market in the interest of consumers,” added Bailey. “This is something we are keen to scrutinise and test – especially low-cost ‘all you can eat’ packages, or one-off events such as conferences priced substantially below cost.”

The FCA is continuing to monitor pricing developments and the European Commission has also launched a study on the impact of MiFID II on research market.

In addition Bailey said there inconclusive evidence that coverage of smaller companies has fallen due to unbundling.

He cited data between 2015 and 2018 that showed that analyst coverage levels on the London Stock Exchange’s main market and on AIM, the market for growth companies, have remained broadly consistent. There has also been a a material increase in trading volumes on LSE order book data since the start of last year, especially for small caps, which Bailey said suggests that liquidity has been maintained.

Bailey concluded: “Competition creates winners and losers – this may mean some consolidation in parts of the market and, hopefully, new opportunities for those offering the best products and services.”