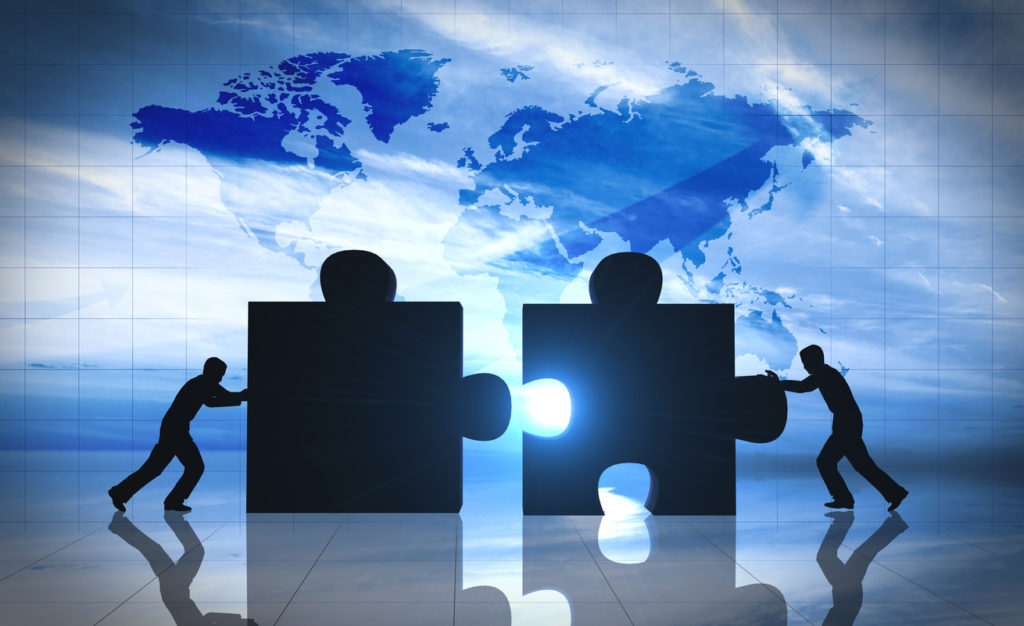 James Gorman, chairman and chief executive of Morgan Stanley, said the acquisition of asset manager Eaton Vance is the combination that the bank has been looking for during the last 10 years.

Morgan Stanley announced today that it will buy Eaton Vance, which has more than $500bn ($426bn) in assets under management, for an equity value of approximately $7bn.

Gorman said on a conference call today: “We want to add ballast to our speed as there are difficult conditions in the water today.”

He continued that the speed is provided by the engine room of Institutional Securities which has been repositioned over the last decade and achieved true scale. 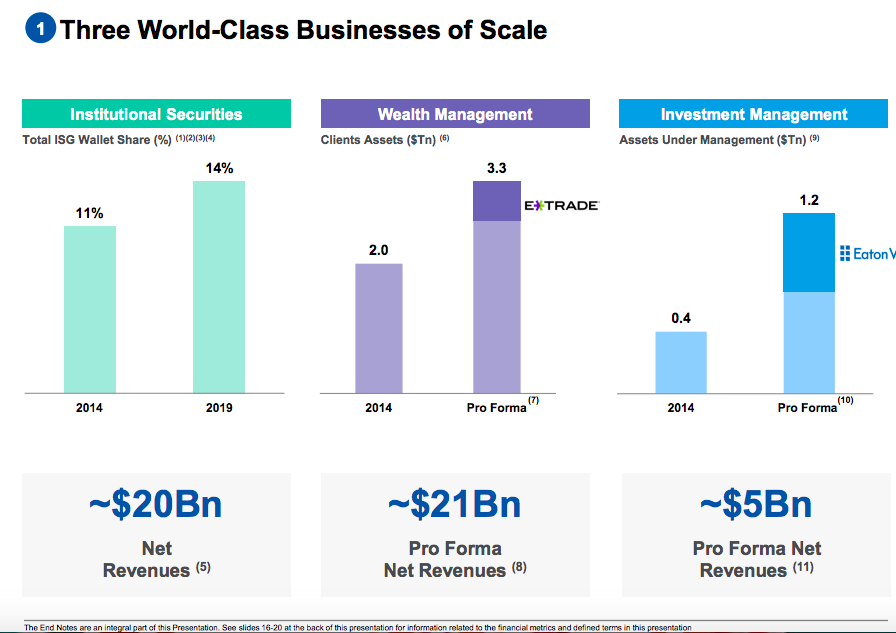 Gorman added that the pro forma revenues in wealth management and asset management from the combination will be approximately $26bn, which makes the merged firm the number one in the world.

“It is the combination we have been looking for over the last decade to give us organic growth across all three of our businesses,” said Gorman. “In 2014 we had wealth and investment management client assets of $2.4 trillion and pro forma AUM will be $4.4 trillion.” 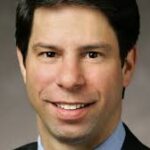 Dan Simkowitz, head of investment management at Morgan Stanley, said on the call there are multiple growth opportunities from the combination of complementary businesses. For example, Eaton Vance’s distribution is mainly in the US while Morgan Stanley has international distribution. Eaton Vance also has  strong presence in customization through Parametric and sustainable investing through Calvert.

“We will have scale where scale matters and fill important gaps” added Simkowitz. “For example, we have been building in loans and municipals but Eaton Vance has both.”

In contrast Morgan Stanley has more than $110bn of client capital in private capital where Eaton Vance does not have a presence. As a result, there are meaningful opportunities to sell products from day one according to Simkowitz. 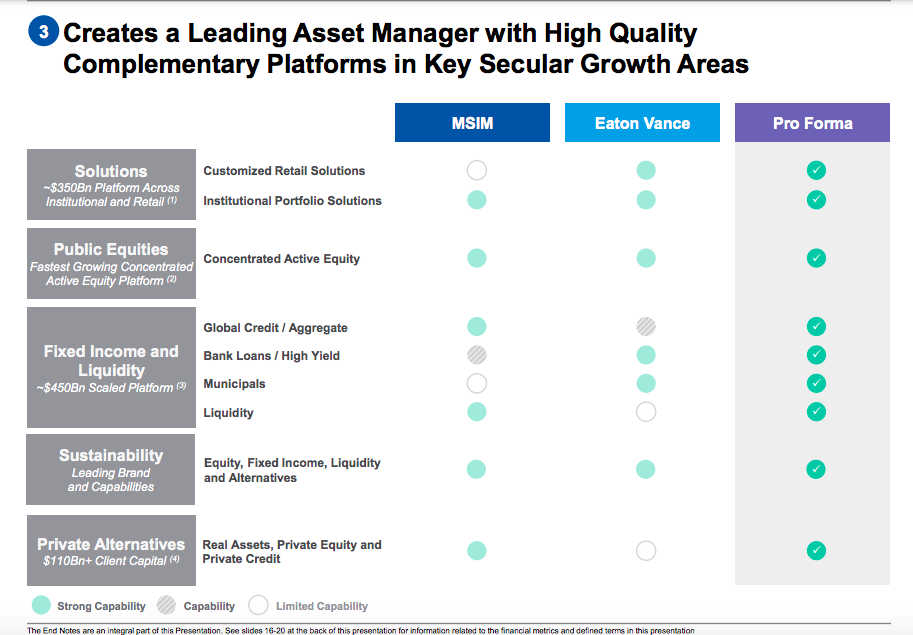 An analyst on the call commented that most asset management mergers have been unsuccessful and asked why this is different.

Gorman argued that both parties want to do the deal and they have little overlap. He said: “Most deals are to acquire scale in one space and that creates a lot of friction. We do not have Parametrics and they do not have an alternatives business. They have US distribution, we have international.”

Thomas E. Faust, Jr., chairman and chief executive of Eaton Vance, said on the call that the firm has an unusual structure as all the voting shares are held by 25 senior members of staff.

“We met last night and voted 25-0 in favour,” Faust added. “We were assured that we are in complete alignment on how to achieve success in asset management.”

Faust continued that the premise of the deal is that it will accelerate Eaton Vance’s growth. “Morgan Stanley’s international and institutional distribution overwhelms anything we could have put together on our own,” he added.

Gorman said the the transaction is expected to be immediately breakeven to earnings per share, and then be marginally accretive, while adding approximately 100 basis points to return on tangible common equity. 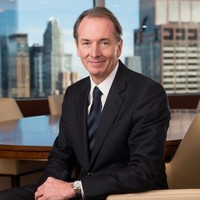 He continued that the bank would not make any more acquisitions as it is focussed on integrating two large deals over the coming years. At the beginning of those month Morgan Stanley completed the acquisition of E*TRADE Financial Corporation.

“We have made our bed and want to lie in it,” added Gorman. “There will be no more acquisitions.”

The deal is expected to close in the second quarter of next year.

MS now owns the amber slice of the below chart, which is tiny vs ETFs and TIFs, and if anything, it's shrinking not growing as Parametric (aka Direct Indexing) has seen OUTFLOWS over past 12mo vs HALF A TRILLION of inflows for ETFs. Until these numbers shift, call me skeptical. pic.twitter.com/4u6bEjk6Ux

Big news for the $$ management business where the biggest firms will only get bigger: Morgan Stanley $MS will buy Eaton Vance for $7 billion. That follows