Lauri Rosendahl, senior vice president for European equities and president of Nasdaq Nordic, said the exchange group may announce crypto initiatives in the second half of the year as it looks to growth opportunities.

At the beginning of this year the MiFID II regulations went live in the European Union changing market structure in the region and the way that many asset classes are traded. For example, double volume caps have come into force on dark pool trading with exemptions for large-in-scale (LIS) trades above a certain size as specified by the European Securities and Markets Authority. In order to meet the MiFID II transparency requirements Nasdaq had launched Auction on Demand, which includes a periodic auction, last year.

Rosendahl told Markets Media: “We are focussed on the quality aspects of Auction on Demand such as addressable liquidity and execution probability. Periodic auctions should evolve as we see that they have a role to play.”

He continued that many lessons need to be learnt from the implementation of MiFID II, including not introducing regulations at once across multiple asset classes. 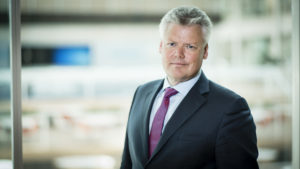 “Unfortunately, after five months I would conclude that the cost and disruption of MiFID II has not been worth the effort,” added Rosendahl.

He was born in Finland is now based in Sweden overseeing the operations of Nasdaq’s exchanges in Sweden, Denmark, Finland, Iceland, Estonia, Latvia and Lithuania. He is also responsible for Nasdaq’s European cash equities and equity derivatives business.

In Sweden only approximately 1% of the value of all payments was made using coins or notes last year. The Riksbank, the country’s central bank, has said that one of its objectives this year is to review the potential introduction of a digital currency, the e-krona.

Rosendahl said: “We listed our first crypto currency certificates in 2015 and will likely also be announcing new initiatives in this space during the second half of the year. Over time crypto currency will develop as an asset class, but not as a currency.”

Stockholm is also a technology hub with, for example, Goldman Sachs announcing that it will expand its headcount in the city from 30 to 100 employees.

“Within the group we are the analytics hub for market data and we are developing datasets for both the US and Nordic markets,” added Rosendahl. “We are looking at new sources of data combined with machine learning algorithms to find intelligence for investors and provide value-added services.”

“We have three proof of concepts for blockchain coming out of the Nordics and I am really happy that we have got to the point of real use,” added Rosendahl. “We expect some initiatives to be in commercial use at the end of the year or early next year.”

Nasdaq, ABN Amro Clearing, EuroCCP and Euroclear said in a statement this month that they completed a joint proof of concept using blockchain related to collateral processing to clearing houses after hours.

“Today, a CCP margin call typically needs to be covered by euro collateral within a short time frame,” said the statement. “Using the solution developed in the proof of concept, parties were able to handle the margin call, the securities collateral delivery and the return process within minutes.”

Nasdaq developed the proof of concept for the DLT nodes while ABN Amro Clearing, EuroCCP and Nasdaq Clearing developed a specific front-end and managed integration into their own environments. The underlying collateral transfers were processed by Euroclear’s Central Securities Depository.

Diana Chan, chief executive at EuroCCP said in a statement: “With a solution like this in place we will be able to efficiently provide counterparty risk protection of equity trades after hours while reducing operational complexities. Today we are limited by European banking hours or arrangements in other time zones.”

“Mutual fund issuance and redemption is far from efficient,” added Rosendahl. “Our distributed ledger solution is scaleable and will be in industrial use in nine months.” 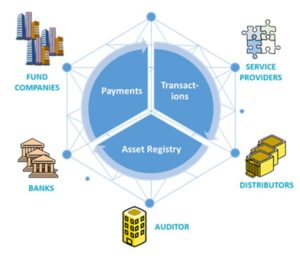 Nasdaq said in a blog last month that  total assets under management in Swedish mutual funds is approximately 3.5 trillion Swedish krona ($431bn). However, each of the many fund companies in Sweden has its own asset registrar to keep track of share ownership, and processing is still manual and paper-based.

Adena Friedman, chief executive of Nasdaq, said at a conference this month that four themes will define the exchange industry over the coming decade – investment banks embracing change; the evolution of investment management; the explosion in data and the markets economy.

She said: “With the launch of the digital economy and online commerce, eBay and other electronic auction communities were pioneers in embracing true price discovery. What we are seeing today, however, is the opportunity for the potential for continuous price discovery as well as auctions in assets outside specialty consumer products.”

Friedman continued that established companies and startups are moving toward this model. 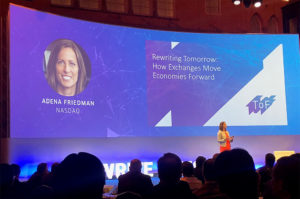 “Moving the markets into the cloud to globalize participation, leveraging the immense power of data to empower consumers and investors, integrating the blockchain to facilitate instant settlement and ownership tracking, and the potential for digital currencies to accommodate the flow of capital, will all combine to change the nature of capital markets — just as it will the nature of global commerce,” she added.

Rosendahl identified other opportunities including raising capital for small and medium-sized enterprises, the growth of green finance, exchange-traded funds and the departure of the United Kingdom from the European Union.

He said: “Sweden has had an ecosystem to support SMEs for a number of years and that had spread throughout the Nordics with Denmark and Finland now also showing great momentum.”

On June 15 Nasdaq said the number of listed companies across its Nordic and Baltic markets exceeded 1,000 for the first time, primarily due to Nasdaq First North. Since the beginning of 2016, 165 new listings have raised €1.8bn on the European growth market for SMEs. In addition, more than 60 companies have transferred to the main market since the growth market was launched in 2006.

“Last year 115 new companies listed and far this year there have been 44 [as of June 21],” added Rosendahl. “In the last four years we have had the fastest growth in the number of listed companies out of all the European exchanges.”

He continued that Brexit has led to interest from companies who may have previously looked at listing on Aim, the London Stock Exchange’s growth market, such as the UK’s Flexion Mobile and five to ten Irish companies who may list.

“Brexit also presents an opportunity, particularly in fintech as Sweden has the second highest number of unicorns per capita after Californ,” said Rosendahl.

He continued there is also momentum in the Baltics with the recent privatisation of the Tallinn port bringing in retail demand from the Nordic markets.

“We have an opportunity to open up an even better gateway to the Baltic markets which will be positive for the region,” added Rosendahl.

He described Nasdaq Nordic’s ETF market as “under-developed” but said the exchange is seeing some movement and the potential entry of some big international issuers.

“I believe that sustainability and green finance will have the biggest impact on investments and asset  management over the next three to five years,” Rosendahl added. “The owners of capital are beginning to think about what their capital is being used for.”