Bond yields remain stuck near historical lows. How low? So low that investors actually need to pay to own about one-fifth of the global fixed income market.

But total-return expectations have been edging lower very slowly and incrementally. This presents a conundrum for fixed income investment managers, who need to move the two sides together, i.e. generate as much yield as prudently possible while managing client expectations.

Bill Street, senior managing director and head of investments for Europe, Middle East and Africa at State Street Global Advisors, the investment management arm of State Street Corp., has been discussing return expectations with institutional clients given low interest rates and negative yields, particularly for many government bonds. He said: “Investors’ long-term expectations on their overall portfolios still lie at 10.9% and they still have expectations in the bond market of 5.5%.”

Zeno, the ancient Greek philosopher, posed a conundrum in which a walker heads towards a finish line 10 yards away but every step he takes is half the length of the previous one. So the walker never reaches his destination even if he takes an infinite amount of steps.

Gross said: “Mathematically correct but the real world resolution was that Zeno’s walker and everything else that we experience moves forward in full step integers as opposed to fractions. It was a mathematical twist only. But there is no ‘math only- twist to today’s bond and investment markets. Negative interest rates are real but investors seem to think that they have a Zeno-like quality that will allow them to make money.”

In its Outlook for 2016, SSGA said investors should put aside the traditional 60/40 approach for equities and fixed income in a portfolio and instead target factors such as equity beta, fixed income duration, leverage and liquidity as a viable alternative to going active or lowering return expectations.

Street added: “In the institutional space, rebalancing takes time but the reality is that the Japanese, European, and maybe even U.S., bond markets are going to be flat for a very long time. One of the things we have been discussing is looking at different ways of giving bond portfolios a more fundamental weighting rather than a cap-weighted approach.”

“Given negative government yields, how much of that is going to come out of the corporate or emerging-bond end of the market?” Street added. “Emerging market debt is the real asset class of choice at the moment where we have seen a significant amount of flow, and also into emerging market equity.”

SSGA expects lackluster growth, low inflation and limited policy tightening this year. Rick Lacaille, chief investment officer at SSGA, said in a report: “We continue to see the risks as skewed to the downside, likely fueling bouts of investor uncertainty and market volatility.”

Street said in the 2016 Outlook that a feature for much of the past two years has been uncertainty around China, volatile commodity prices and low central bank interest rates. This led to a somewhat disjointed rally in riskier assets that has lifted markets far above the levels of 2009; he believed there were still opportunities in both investment grade and high-yield debt for investors.

In a May 11 interview with Markets Media, Street indicated he is still constructive on risky assets, as his personal view is that rates will remain lower for a lot longer. Despite the Federal Reserve hiking rates in December, Street believes the market is back into a period of coordinated monetary easing from the central banks. “Some of the high yield spreads in the U.S. are quite interesting at between 600 and 700 basis points, and in energy yield is up to nearly 10% which compensates for default risk,” Street added. 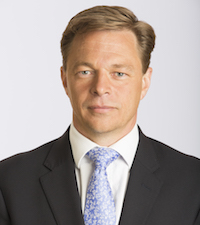 SSGA has nine investment centres across the Americas, Europe and Asia and live, 24-hour trading desks in Boston, London and Hong Kong. One issue for buy-side trading desks has been a decrease in fixed income liquidity as banks have cut their balance sheets and market-making activities. The Desk’s Trading Intentions Survey 2016 found that respondents reported using 28 liquidity aggregation platforms for credit trading in 2016, up from 19 in 2015. The survey had 70 responses from North American, European and emerging market credit desks spread across 34 investment managers, with an aggregate of €15.4 trillion in assets under management.

The Evolving Protocols of Trading

Street said the fixed income industry is shifting from a principal-based business leaning on inventory and risk to an agency-to-agency model and the buyside-to-buyside trading model will continue to develop, but remain very limited compared to trading involving the taking of principal risk.

“State Street has been at the fulcrum of discussing technology that has helped facilitate buyside-to-buyside trading and that continues to improve efficiency at finding liquidity,” he added. “There are questions over whether they creates more true liquidity or just make it easier to hunt out pockets of liquidity and we are probably somewhere between the two.”

There are global chief investment officers for each investment team and regional heads who report both to the global and regional CIOs. “Our teams have global research and investment processes but decisions are tailored to regional opportunities and requirements as well,” said Street.

Each month SSGA’s senior investment staff gather to discuss market and economic trends around the world sharing their insights and considering the implications for investors in different regions. SSGA offers access to every major asset class, capitalization range and style across the indexing and active spectrums. Assets under management were $2.24 trillion at the end of last year

The Investment Solutions Group manages SSGA’s strategic and tactical multi-asset portfolios. The team has monthly investment meetings, known as the Alpha meeting, where they decide the tactical positioning through a blend of quantitative and fundamental processes underpinned by the firm’s alpha models.

“The models assess the relative attractiveness of asset classes e.g. developed versus emerging market equities, using a number of traditional factors such as momentum, value and volatility amongst tens of others,” added Street. “However we also have 30 to 40 portfolio managers around the world, and at least 10 from the region, who overlay a fundamental insight whether we are looking at a European or global allocation.”

A third layer, the politics and policy team, has become increasingly relevant over the last few years due to the  interventionist policy from central banks which may detract from traditional valuations and metrics. If, for example, SSGA sees a valuation point from the European Central Bank rhetoric of what they are looking to do going forward, the investment team will discuss whether they want to temper or exaggerate any of the exposure in the portfolio.

Street said: “In our model approach our asset allocation framework is also driven by volatility modelling, which is different from our competitors. We have a proprietary model, MRI (market regime indicator) which includes a number of factors to overlay the valuation proposal.”

He added that SSGA has built out target volatility triggers across many of the solutions provided to clients, which can be used in asset allocation or single allocations.

“We sit with a client and talk about their volatility tolerances and we then design a portfolio that does not go beyond their volatility expectations through re-risking and de-risking,” Street added. “The client ends up maintaining their exposure and participation in beta but they have peace of mind that volatility is being monitored to limit some of the drawdown.”

For example, if a client agrees a 12% volatility trigger in equities, exposure will be reduced when equity volatility forecast is more than 12%. As the equity volatility forecast reduces back to 12%, equity exposure will be increased. The client therefore gets higher exposure to risky assets in periods of low volatility and lower exposure when volatility is high to achieve a better risk-adjusted return and reduction in the maximum drawdown. Reduced equity exposure can be achieved by either partial sale of the equity portfolio or through the use of derivatives such as futures.

SSGA said that over a simulation period between 1990 and 2013, a volatility trigger of 11% (two-thirds the annualised volatility of the portfolio’s benchmark) applied to the MSCI AC World Index improved drawdown experience after equity falls, lowered realised volatility, and produced similar returns over the period. However the firm warned that assets are not protected against true ‘black swan’ events where significant falls are not preceded by heightened volatility and the portfolio will not participate fully in a rebound if volatility remains high and tracking error relative to a traditional equity benchmark can be significant

Volatility is expected to increase if Britain votes to leave the European Union in June. The UK is holding a referendum on June 23 on whether to remain or leave the EU.

If there is a ‘Brexit’, Street expects short-term market volatility, especially in currencies, He said some equities and the bond market will struggle, especially corporates, and there may be liquidity issues. In the medium term there will be downgrades and counterparty risks and in the long-term there will be MiFID II and the impact on distribution activities.

“Brexit can potentially have a massive impact but there has not been a huge re-positioning from our clients,” added Street. “There has been a re-positioning in our portfolios from a valuation and de-risking perspective as that is the sensible thing to do and we are probably more neutral.”