What a catastrophe. What an abuse of power.

That’s the reaction of OTC Markets to the proposed fee schedule put forth by the Consolidated Audit Trail Plan Operating Committee. In recently submitted comment letter to the Securities and Exchange, OTC voiced its opposition. 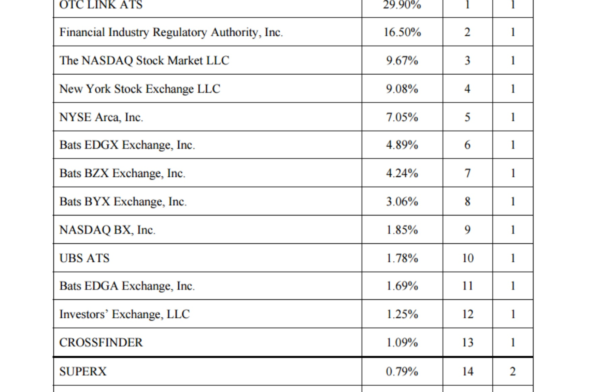 OTC Markets argued that the CAT Plan Operating Committee abused its discretion by placing OTC Markets’ OTC Link ATS in the first tier of execution venues along with the New York Stock Exchange and Nasdaq and that it incorrectly assigned OTC Link ATS to be the LARGEST execution venue, at 29.9%, for the purposes of funding the CAT even though the share of OTC Link ATS in the combined market for NMS Stocks and OTC equity securities based on trade volume is less than 1%. Furthermore, the revenues the NYSE and Nasdaq derive from trading NMS securities is 20x greater than the revenues OTC Link ATS derives from trading OTC equity securities.

Furthermore, OTC said that the members of the CAT Operating Committee got it wrong by failing to consider, as they were obligated to do, the relative impact of the securities trading operations of OTC Link ATS on the CAT Company’s resources and operations. Zinn said that reportable message traffic is the key component of the costs of operating the CAT.

“In turn, message traffic is correlated with the number of trades,” Zinn wrote. “Yet, somehow, OTC Equity Securities ended up bearing an unreasonably large share of the costs of the Plan. An appropriate exercise of discretion would have allocated fees based on actual processing and usage costs, resulting in an allocation of a relatively low share of the costs to OTC Link ATS, other Execution Venues for OTC Equity Securities, and Execution Venues representing less than one percent of NMS volume.”

Zinn continued by stating the CAT Plan required the Operating Committee to avoid placing an inappropriate burden on competition. Instead of meeting this obligation, he said the Operating Committee abused its discretion by placing OTC Link ATS in the same tier of CAT fees as the behemoth trading operations represented by NYSE and the Nasdaq Market, placing a much higher burden on the modest trading revenues of OTC Link ATS than that borne by the trading revenues of Execution Venues for NMS Stocks.

Also, Zinn noted that the Operating Committee’s failure to take into account the disconnect between costs to the CAT system and the burden being placed on OTC Link ATS, likely can be explained by considering the make-up of the Operating Committee. He noted few members who have interests in OTC stocks and many that are only concerned with NMS securities.

“While the CAT Fee Schedule is effective upon filing with the SEC, it can abrogate the CAT Fee Schedule within 60 days of its filing and require that it be refiled if it appears to the SEC that such action is “necessary or appropriate in the public interest, for the protection of investors, or the maintenance of fair and orderly markets, to remove impediments to, and perfect the mechanisms of, a national market system or otherwise in furtherance of the purposes of the Exchange Act,” Zinn ended.