OTC Markets Group connects the broker-dealers that trade the securities that aren’t listed on an exchange.

Leveraging transactional efficiency, transparency, and trust and safety, OTC Markets President and Chief Executive Officer Cromwell Coulson said the firm provides companies three-quarters of what an exchange offers, at half the cost.

OTC Markets, operates three marketplaces: OTCQX, for established, investor-focused U.S. and global companies; OTCQB, a venture marketplace for entrepreneurial and development-stage companies that don’t qualify for OTCQX; and OTCPink, which includes a wide spectrum of equity securities whose companies are there by reason of “default, distress or design.”  Overall about 10,000 U.S. and international securities can be bought and sold via an OTC Markets marketplace.

“As a marketplace operator, we connect a diversity of broker-dealers so trading can take place efficiently,” Coulson told Markets Media in an April 21 interview at OTC Markets’ headquarters in New York’s trendy Soho neighborhood. “We widely distribute our pricing and information about companies so there’s transparency for investors and participants. Then over the past seven years we have focused on improving issuer disclosure and then segmentation within our markets, so that there is better trust and safety for our investors.”

Some 400 companies have moved from OTC Markets to an exchange listing, the equivalent of a baseball player being called up to the major leagues from Triple-A. According to OTC Markets, 83 companies in its ecosystem ‘up-listed’ to the New York Stock Exchange or Nasdaq last year, the most ever for the market operator. 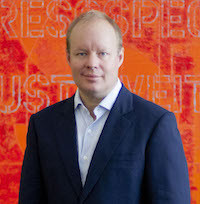 Some investors are leery of stocks that don’t trade on exchanges because of the potential for price manipulation. OTC Markets has tackled this issue by deploying technology to enable issuers and market makers to better communicate with each other. “The old pink sheets version was like Craigslist, and we wanted to become more like eBay,” said Coulson. “The more light we can shine on these markets, the more transparency we can bring, the more it’s going to drive better price formation and make it easier for regulators to regulate the markets.”

The fact that exchange-listed companies fall under the oversight of the U.S. Securities and Exchange Commission offers some measure of safety, but the SEC backstop is hardly a guarantee, as the early 2000s blowups of Enron and WorldCom attest. “The SEC takes what the companies give, and sometimes companies lie,” said Coulson.

“People are always going to talk about risk issues, but 83 graduates to exchanges last year is a pretty good accomplishment,” added Coulson, himself an 18-year veteran of OTC Markets.

OTC Markets has implemented a verification process for companies to qualify for listing on OTCQB, including background checks of a company’s management, directors, and major shareholders.

From an issuer point of view, OTC Markets’ primary user base are its QX companies, which range from ‘name’ companies like Roche, Adidas, and Lufthansa, to small Canadian mining and minerals concerns.

OTC Markets does not operate a centralized matching engine and does not anonymously match trades. Its subscribers, who are Finra broker-dealers, are known by their MPID (Market Participant Identifier), which is system by displaying within their quotes and within each one of the trade messages that they send back and forth between one another for potential execution.

In a big-picture sense, OTC Markets fills the role Nasdaq filled 20-30 years ago, when it was the National Association of Securities Dealers and before it was an exchange. Now, Cromwell said Nasdaq is the Pepsi to NYSE’s Coke, while OTC Markets is “the uncola”.