In yesterday’s general election the Conservatives, led by Prime Minister Boris Johnson, won an unexpectedly large majority of 80 seats. The majority will help the UK government deliver on its pledge on leaving the European Union by January 31 2020. 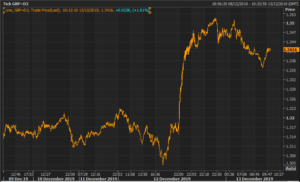 Clarke added: “We have not seen similar moves since 18 April 2017, the date of the last general election, when sterling gained from an open of 1.2562 to a close of 1.2842 after a high of 1.2908. In terms of volume, we saw a peak of trading activity in the first 30 minutes after the exit poll, after which trading settled to a strong but more typical level.”

Tim Graf, head of macro strategy for EMEA at State Street Global Markets, said in an email that there is not a lot of upside left for sterling. He added: “Sterling is now rich versus the other currencies for the first time since the referendum.”

Nick Burchett, co-fund manager at Cavendish Asset Management, said in an email that institutional investors should guard against being overly bullish about sterling.

“Investors should not forget that the political declaration only states an objective for the UK and EU to reach a zero tariff and zero quota trade agreement,” he added. “Nothing is set in stone and with trade talks likely to run beyond 2020, currency markets may want to err on the side of caution.”

Olivier Konzeoue, FX sales trader at Saxo Markets, said in an email: “We believe we could see a second leg higher for sterling and UK assets, but the bulk of the current underweight in UK asset allocation is expected to be addressed a few weeks from now. In short, the result is positive for markets, but patience will be key from now on.”

Markets tend to over-react in the immediate aftermath elections, but our Colin Morton stands ready for potential opportunities that may result from #GE2019 https://t.co/9QGytdaia0

“Even though a rallying pound is likely to put some pressure on overseas earners, at the same time, we think a proportion of the potential assets coming back into the UK market could find its way into FTSE 100 Index companies because of the liquidity that index has historically offered,” he added.

This is a clear result that should allow the country to finally turn the page on the first phase of Brexit. With a January Brexit now all but certain, both sides must move quickly to prepare for the next stage of the negotiations. #GE2019 1/3

See below for @TheIAChris' full response on the election. pic.twitter.com/QITl19PhqU

Richard Colwell, head of UK equities at Columbia Threadneedle Investments, said in a statement that UK valuations are at 30-year lows compared with international equities as a whole.

“So the greater clarity we now have over Brexit and UK politics should not only spur an immediate stock market rally, but also encourage a longer lasting reappraisal of UK-listed companies,” he added. “Global asset allocators who had fallen out of love with the UK will likely shift money back to the region.”

Adrian Hilton, Head of Global Rates and Currency: "Markets might welcome the end of uncertainty, but while the 'remain tail' of the distribution has been eliminated, the remaining possible outcomes are all riskier to future UK growth." https://t.co/GSwGAnp5oY #ElectionResults2019 pic.twitter.com/BSIRmzRRHT

Philip Dicken, head of European equities at Columbia Threadneedle, agreed that UK stocks and sterling will take some heart from the clarity of the result.

He said in a statement: “But until we have more evidence of what the Brexit terms will be, there may be continuing weak capital investment in the UK, which will be a brake for domestic economic activity.”

Read our latest insight from @HLPublicLaw 'General Election result. A Conservative majority: Getting Brexit done starts now, but we are not done with political uncertainty' here -> https://t.co/7m5c9u2vaB #BrexitEffect pic.twitter.com/lDAwidGP3F

Law firm Hogan Lovells said in a statement that that it expects the Prime Minister’s withdrawal deal to be passed by 31 January nest year but the deal leaves many more questions than answers.

“The timetable is less certain than it might seem,” added Hogan Lovells. “The net result for business is that political risk will remain heightened in 2020. There has never been a greater need for businesses to engage in informing the policy choices that will shape the UK’s economic and political future, and their own business environment.”

Ben Higson, partner at Hogan Lovells, said in an email: “One of the biggest differences between this Government and its immediate predecessor is its desire to uncouple UK regulation from that in the EU. Over time we are therefore likely to see divergence with the aim of making the UK a more business and innovation friendly jurisdiction than its larger European neighbour particularly in the industrial areas which the Government sees as the future.”

#dbresearch Oliver Harvey’s assessment of the #UKElection and what it means for the UK macro outlook pic.twitter.com/7bZe5Lp5wm

The Brexit Withdrawal Agreement will now pass soon, possibly before year-end. And the UK will leave the EU by the end of January. Then the fun and games with the future relationship will begin immediately after. #reidoftheday #dbresearch #ukelection pic.twitter.com/gJmj0TWDsg