The US Securities and Exchange Commission has started investigating possible reforms that likely would make the core-data feeds published by the Securities Information Processors far more competitive with exchanges’ proprietary data feeds.

Speaking in a tag-team fashion before an audience at Fordham University’s Gabelli School of Business, Securities and Exchange Chairman Jay Clayton and Brett Redfearn, director of the Division of Trading & Markets at the SEC, cited several concerns raised during the regulator’s market-access and market-data roundtable, held on October 25, 2018, as prime drivers for the review. 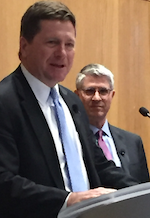 “Several panelists noted that, given the centralized infrastructure of core data, it could no longer be considered timely in today’s high-speed markets, and that the content of core data may not provide some key information necessary to trade optimally,” said Chairman Clayton. “Some panelists went further and asserted that they did not believe that core data was sufficient for brokers to achieve the best execution for their customers.”

Based on these concerns, Chairman Clayton stated his personal belief that now as the time to investigate whether investors would be better served with an upgraded version of the core-data feed and that he has instructed SEC staff to develop recommendations that would address the concerns of the roundtable participants.

“Many panelists were emphatic in their view that core data is no longer sufficient for brokers to trade competitively,” added Redfearn. “As a result, I believe we must assess whether the current core data system is contributing to a bifurcated landscape of market data that calls into question whether access to markets remains fair and not unreasonably discriminatory.

Among the core-data issues that the SEC staff were tasked to investigate its speed, content, treatment of odd lots, governance model, and transparency as well as fair and efficient access to it.

Under consideration is whether the regulator should shrink the size of round lots of the more expensive to 10 shared from 100 shares.

“Adjusting the displayed quote size in core data without changing the definition of protected quotes under Rule 611 could provide a test of the extent to which enhanced best execution, rather than the prescriptive approach of Rule 611, warrants further consideration in the future as the best way to proceed for the benefit of Main Street investors,” said Redfearn.

Changing the treatment of odd lot orders is critical for the markets, noted The Healthy Markets Association in a comment letter filed with the SEC on March 5.

The odd lot orders lack the same Reg NMS protections enjoyed by other orders, which might make it difficult of market participants to gain an accurate understanding of best execution, wrote Ty Gellasch, executive director of the Healthy Markets Association.

“As one Nasdaq executive told the Commission staff at the October 2018 Market Data Roundtable, adding odd lot quotations to the SIP ‘seems like a no brainer, the way the markets have evolved over the years,” he added. “This sentiment was shared by executives from Cboe and NYSE. We agree. We are aware of no reason why odd lot orders and executions should not be included in the SIPs and in execution quality statistics.”