There has been an increasing focus on the incoming Securities Financing Transactions Regulation as the European Commission has commented on the requirements for the first time.

SFTR requires firms to report securities financing transactions including repurchase agreements, securities lending and margin lending trades, to an approved European Union trade repository. The regulation is part of the EU’s approach to meeting the objectives set out by global regulators to increase transparency since the financial crisis.

Tom Pikett, business development manager, SFTR at Trax, told Markets Media: “The European Commission has given feedback to the European Securities and Markets Authority on SFTR for the first time, which has ramped up activity.”

Trax is the MarketAxess subsidiary specialising in regulatory reporting, post-trade matching and market data to the capital markets. Pikett continued that the Commission has not asked Esma for major changes.

“An educated guess is that the regulation will likely be approved in September or October,” he added. “SFTR should then go live in the first quarter of 2020.”

When the EU introduced reporting of derivatives to trade repositories under Emir, the central clearing regulation adopted in 2012, there were issues with poor data quality and lack of reconciliations. The introduction of MiFID II this year mandated further trade reporting requirements across asset classes.

“Regulators have been more prescriptive on SFTR fields which should help standardisation” added Pikett. “They have also mandated a standard messaging format when reporting to and receiving responses back from trade repositories which should help reconciliation and increase competition between repositories by making it easier to move.”

In September last year Trax announced a collaboration with EquiLend, the securities finance trading, post-trade and market data provider. Brian Lamb, chief executive of EquiLend, said in a statement: “SFTR is one of the most complex and data-intensive regulatory reporting requirements the European securities finance market has ever seen.”

The requirement to report 153 fields on a T+1 basis under SFTR creates the need for automation in markets which have been dominated by bilateral trading and manual processes.

Trax can provide regulatory reporting and repo trade confirmation expertise while Equilend can supply the securities financing data required for SFTR reporting at the point of trade, including unique transaction identifiers, transaction time stamps and lifecycle events. EquiLend will also link its trading and post-trade platform to the Trax system to provide client trading and life cycle event information, while Trax will provide EquiLend clients with data enrichment, reporting services and access to multiple trade repositories.

This month Trax, and EquiLend said they have formed a collaboration with trade repository Regis-TR to extend their SFTR service.

Chris Smith, Head of Trax added “The aim of the collaboration with REGIS-TR is to further emphasis the value of this joint solution & the value it will bring to the market ahead of #SFTR go-live” https://t.co/U9TYuA8Rss

Irene Mermigidis, co-managing director of REGIS-TR, said in a statement that the trade repository has  received significant demand from participants who intend to use the EquiLend and Trax SFTR solution. 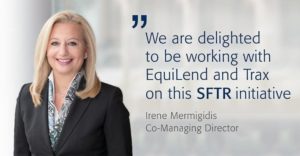 Pikett said Trax will connect to any trade repository that is requested by clients. He continued: “The partnership with Regis-TR follows a similar arrangement with DTCC.”

In June the US Depository Trust & Clearing Corporation said it would be collaborating with EquiLend & Trax and IHS Markit & Pirum to enable greater levels of straight-through-processing for SFTR to its European trade repository, GTR. The DTCC said each of the firms will build to DTCC’s GTR and enrich data to SFTR reporting standards.

Chris Childs, president & chief executive, DTCC Deriv/SERV, said in a statement: “The industry has invested heavily in establishing an infrastructure for over-the-counter derivatives trade reporting and this is an example of identifying opportunities to expand the use of the existing platform for SFTR.”

Both REGIS-TR and DTCC will have to apply to become a registered trade repository under SFTR once the relevant technical standards have been approved and put in place by Esma.

The DTCC and consultancy The Field Effect recently published a paper which said that transaction reporting for securities financing trades under SFTR may create five times as many reports as trades.

The paper also highlights that SFTR is likely to significantly impact trade booking models and affect 60% of current processes, resulting in the need to develop new processes. Furthermore, the new regime may create changes to sources of collateral supply within the market and the industry will need to make provisions to ensure that these unintended consequences do not result in collateral supply and liquidity issues. 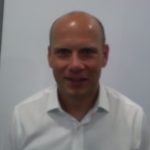 Val Wotton, managing director, product development and strategy, derivatives and collateral management at DTCC, said in a statement: “While SFTR will be phased in starting in 2020, market participants must act now to be ready for implementation and to avoid any issues around trade reporting volumes, liquidity and collateral supply.”

Pikett added: “Tier 1 banks are storming ahead with their preparations whilst a large portion of the small to medium firms have not started, as they are waiting for endorsement from the European Commission. Agent lenders have been very active with SFTR, but the repo market needs to pick up the pace with engagement.”