He appeared on a podcast with Jake Moeller, head of Lipper UK and Ireland research at Refinitive in London on August 29.

On the podcast Skeoch said: “As an industry we are going to have to learn to live with a lower fee structure and we have to manage this strategically. You can charge a premium for good performance and we are in more specialist areas were fees have held up a little better.

Detlef Glow, head of EMEA research at Lipper, said in his Monday morning memo today that the fund industry needs to re-invent itself.

Glow cited a study, Searching for Growth in an Age of Disruption, by consultant Oliver Wyman and Morgan Stanley Research which said revenue growth is slowing in asset management as investors are unwilling to pay fees and passive investments continue to gain market share. The report forecast a compound annual growth rate of just 1% for asset management revenues.

“From my point of view this means that asset managers need to re-think their business models and decide if they want to stay in a market segment that is expected to face shrinking assets under management and an ongoing decrease of fees,” added Glow. “Alternatively, they’d have to change their fund management approaches from benchmark driven management to real active management.”

Glow continued that fund managers also need to review their policies on how they treat their customers by increasing transparency. “Asset managers, therefore, need also to change their communication channels to succeed in a digitalized world,” he added.

Standard Life Aberdeen reported in its half year results this month that assets under management had risen 5% to £577.5bn ($696bn). Net outflows reduced to £15.9bn, compared to £24bn in the second half of last year.

Skeoch added: “We are pretty confident that we have turned the corner on performance in three out of four flagship funds. We have repaired our three-year track record. We are getting our mojo back and as that continues flows will follow.”

Standard Life Aberdeen said that in the first six months of this year 65% of assets under management were above benchmark over three years, compared to 50% for last year.

“There is light at end of the tunnel,” added Skeoch. “Nothing improves morale like improving investment performance.”

He believes there are opportunities for active management as volatility increases. 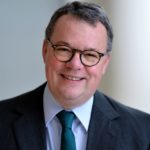 “We need to deliver investment performance which maps to client needs rather capital appreciation or a return relative to a benchmark,” Skeoch said.

Another trend will be that asset owners will increasingly be individuals rather than large institutions. “We need to make a connection rather just pushing product down pipes,” added Skeoch.

In addition he favours emerging markets.

“Emerging markets have been so much out of fashion,” he continued. “However it is unthinkable that in 10 years time, emerging markets will not be a more important part of the world economy.”

Skeoch said the largest risks at the moment are the lack of geopolitical consensus, the possible slowdown of the world economy and the effect of UK politics on sterling.

“We have been thinking about a no-deal Brexit since May and working out what we can to be prepared,” Skeoch added.