Target2-Securities needs to attract more volumes in order to decrease per-unit costs and meet the full potential of the project to harmonize securities settlement in Europe.

Alan Cameron, head of relationship management, international banks and brokers at BNP Paribas Securities Services, said: “T2S is a great leap forward in harmonization, security and capital efficiencies but needs to address some immediate issues to fulfil its potential.”

Cameron made a presentation at the European Post-Trade Conference in London yesterday held by the Association for Financial Markets in Europe. He added that settlement should become cheaper once all 23 central securities depositories have joined the platform and reducing the headline cost should remain the most important objective.

The European Central Bank launched the T2S project in 2008 to end fragmentation in securities settlement across the Eurozone by providing a single IT platform to settle transactions in central bank money across borders, central securities depositories and currencies so there is no difference between domestic and cross-border transactions. A single set of rules and standards apply to all transactions through T2S which reduces the complexity of the market structure and aims to make European markets more efficient and attractive to investors.

“T2S has high fixed costs but low marginal costs so needs to attract volumes,” Cameron added. “Volume can come from five possible areas – the UK, Switzerland, Scandinavia, fund markets, or Eurobonds – and the priority should be to get one of those on board.”

Marc Bayle de Jessé, director general market infrastructure and payments at the European Central Bank, said at the AFME conference that T2S had been successfully delivered after a long pregnancy. He said: “The most likely market to join in order to increase volumes and lower costs is Eurobonds.”

He added that the ECB is looking to use the technology from T2S in TARGET2, the Eurozone cash settlement system. The Euro Retail Payments Board has invited the payment service industry to develop a scheme for instant payments in euros by November this year and to implement it by Nov 2017.

The first wave of CSD migrations to T2S were between June and August last year and seven markets have joined the platform. Euroclear is due to join in September this year in the third wave, seven months later than originally planned. Deutsche Börse’s Clearstream is slated to migrate in February next year with the final migrations in September 2017.

Bayle de Jessé said: “We are operating at 15% of the expected volumes after full migration has been completed.”

In March this year T2S processed an average daily volume of 2 million transactions with just over 495,000 settled in real-time with efficiency of more than 99%. T2S currently only supports euro transactions but Danish Kroner in due to join in 2018 and Bayle de Jessé said there is scope for further globalisation. 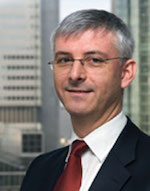 Paul Symons, head of government relations at Euroclear, said at the AFME conference that the CSD is ready for migration in September.

“The dress rehearsal in March went pretty well and the final test will be in early July,” Symons added. “A survey in April found that 80% of our clients, representing about 90% of volumes, felt they were ready for migration.” He continued that Euroclear Bank has already noticed improvements in settlements from CSDs who have already migrated to T2S.

Guido Wille, executive vice president, head of market development at Clearstream, said at the conference that the firm is ready for migration next February. “We are confident that T2S will be ready to accommodate our business in nine months time,” he added.

T2S allows auto-collateralization where the European Central Bank can anticipate funds needed for settlement and allow netting between national central bank balances e.g a long position in Italy and a short position in another country.

Zignazi added: “We don’t yet see cross-border activity moving to T2S. For example, our clients would like to settle Greek or Belgian bonds in T2S but there is not yet enough liquidity.” He expects liquidity to increase over time as more waves join.

“Once the whole migration is complete there will be more activity on T2S from eurobonds, government bonds, funds and exchange-traded funds,” said Zignazi. “There are lots of new opportunities.”

Wille said that over next two to three years clients will look to centralize their euro liquidity in the central bank of their choice and centralize securities settlement in one CSD.

“Consolidation in securities and cash settlement will allow netting and balance sheet opportunities,” he added.

Wille continued that the most exciting opportunity is the current lack of competition in custody but  that will change as CSDs begin to compete in primary markets. “For example, corporates will be able to issue Spanish assets in non-Spanish CSDs on T2S,” he said.