The Myth of the Great Rotation

The Great Rotation from bonds into equities may be an illusion, because the reality is that the macroeconomic underpinnings needed to support it haven’t materialized yet and aren’t likely to any time soon.

From 2008 to 2012, more than $540 billion left equity funds and flowed mostly into fixed income funds. In the first quarter of 2013, a record $19 billion flowed back into equities and the stock market hitting new highs kicking off a strong equities rally.

Economic growth still remains sluggish, interest rates are at record low levels and Europe isn’t out of trouble yet.

“In order to get a Great Rotation, there needs to be a supporting macroeconomic story, i.e., an environment where actual and perceived returns on equities look sustainable vis-a-vis fixed income investments,” said Bruce Kasman, chief economist and managing director of global research at JP Morgan, at a press briefing hosted by Liquidnet on Thursday. “There also needs to be sustained corporate profitability.”

Against that backdrop, the huge move into equities “is not the Great Rotation from bonds into equities, but is rather a move out of cash driven by macroeconomic developments,” Kasman said.

The sentiment on the Street remains cautious, with some calling this the most “unloved” bull market in history.

“We have seen action in equities and some countervailing action in fixed income, but it’s not the Great Rotation,” said Zane Brown, fixed income specialist at Lord Abbett. 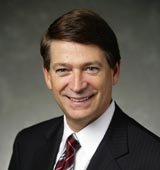 That could change if the economic picture improves, and may have already started to change.

But this still doesn’t signal the beginnings of a Great Rotation, because these huge outflows from fixed income have not been matched by inflows into equities.

Instead, Brown said, it may signal a “Safe Haven Rotation,” with investors diversifying away from perceived safe-haven bonds into other areas, such as emerging market sovereign debt or high-quality corporate issues.

“If GDP gets to 3%, and inflation to 2%, bond prices will fall,” Brown said. “Safe havens of high-quality securities will take it on the chin versus higher-yielding albeit lower-duration securities.”

By stating that it was actively considering reducing its purchases, the Fed has introduced much more uncertainty into the pricing equation than was immediately apparent.

“With the current Fed buying program, we don’t actually know what interest rates would be otherwise,” said Brad McMillan, vice president and chief investment officer at Commonwealth Financial Network, in a blog. “And since we don’t know what rates would be without the Fed, we can’t know what rates will be when the Fed starts to pull back. The obvious reaction to this pricing uncertainty from other buyers is to be cautious, and to pay less for bonds, forcing rates up. This is exactly what we have seen.”

The shift toward a more stimulative monetary policy, in the form of the Fed’s QE3, has reduced the tail-risk of equities, Kasman noted, but this has taken place while bonds were still rallying.

Although the Fed has made noises about moving toward a less accommodating policy on interest rates, the fact remains that the U.S. economy will be hard pressed to register more than 2% growth in GDP.

“The bigger issue is not the Fed, but the growth story,” Kasman said. “Over the next six to 12 months, can we get from a still sluggish global economy with weak corporate profits to one of sustainable growth and profits? Can we get over the hump, having had two false starts in the previous two springs?”