“The majority of our strategies and algorithms have a big ‘gray box’ component — humans overseeing the technology and resetting parameters as needed,” said James Heinz, managing partner of the Chicago-based proprietary-trading firm.

The blended trading strategy is akin to that of floor specialists on the New York Stock Exchange and other bourses who by combining computers, live floor action, and their own instinct, “have it right,” Heinz said. 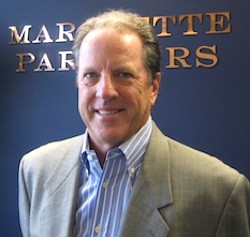 Founded in 1990 by Heinz and Robert Moore, Marquette says it’s a leading liquidity provider on the Chicago Mercantile Exchange, the Chicago Board of Trade, and IntercontinentalExchange in the U.S., and Eurex, Euronext, Liffe, and Borsa Italiana in Europe. Organized as what Heinz calls an “internal hedge fund,” the firm employs 80 traders across its offices in Chicago’s West Loop and San Francisco.

Marquette’s roots are in fixed income. In 1978, Heinz became one of the first Treasury bond traders at Chicago Board of Trade. He and Moore, both graduates of Marquette University in Milwaukee, were locals on the trading floor throughout the 1980s and 1990s, sharpening their skills in arbitrage across global bond markets.

Starting with just $1,500, Heinz (trading at night) and Moore (trading during the day) heard about success other traders were having making small, but high-probability profits between Liffe and Chicago bond futures.  “We got in on the forefront of the boom in arbitrage between Chicago and London, London-Frankfurt, then London-Paris and London-Milan,” said Heinz.

Utilizing technical and fundamental analysis, Heinz and Moore became adept at tightening bid-ask spreads on electronic bond markets. The two traders were especially active trading Italian bonds on the Deutsche Terminbörse, a pioneering all-electronic derivatives exchange that launched in 1990 and is a forerunner of Eurex, and on Borsa Italiana.

“They were extremely wide markets, except London’s,” Heinz recalled. “We generated a lot of volume.”

Far removed from its early days as a two-man, shoestring operation, today’s Marquette Partners is sizable enough that it needs to take precautions to not trade more than 10% of the volume in any market. Still, the firm remains true to its principal of providing fair value in correlated markets, according to Heinz.

“We are price-sensitive to correlations and what leads that might give us,” Heinz said, noting that “fair-value market making” is Marquette’s specialty.

Like some other Chicago futures mavens, Heinz and Moore espouse transparent price discovery; in Heinz’s view, where an order is placed is more important than speed .

Heinz wondered about some large prop-trading firms that internalize order flow, or match trades internally, rather than execute on an exchange. “There’s no participation in price discovery when you make markets in a dark pool,” Heinz said.

Marquette is a member of multiple exchanges globally, an arrangement active traders typically need for better pricing on clearing and fees. “We do enough volume that we have to have that,” Heinz said. When trading on lit venues, Marquette will “lift the offer, hit the bid, and be very active,” he added.

By way of trading strategy, Heinz noted that many correlations between exchange-traded securities are “well-traveled” in the market and thus more difficult to generate profit from. Marquette focuses on the strongest correlations and applies different mathematical ways to find trading opportunities.

Risk management and ensuring regulatory compliance are key focus areas for Marquette, Heinz said. One specific initiative was the implementation of automated kill switches to guard against rogue algorithms.

Marquette regularly reviews personnel and systems checks and balances, including market liquidity in options, equities, and futures. “We’ve had no algo snafus, but we spend an enormous amount of time on how to enter and exit positions,” he said.

Lingering uncertainty about the end result of Dodd-Frank and other financial regulation is forcing a burdensome amount of communication between clearing firms, exchanges, and professional advocacy groups. “Everyone is under pressure” to gain clarity on issues such as firms’ regulatory designations and notional swap values, Heinz said.

Heinz noted another regulatory concern is an increase in capital requirements, which apply to big banks specifically but hold implications for all market participants in the form of potentially less liquidity and wider bid-ask spreads.

As far as industry leadership, Heinz said he has never been more “bullish” on Jeff Sprecher of ICE, and Terry Duffy of CME. “Their stewardship and weaving their way through regulation turbulence and constant lobbying to protect stock values deserve mention,” he said.

Heinz also lauded Chicago exchange leaders for keeping headquarters jobs and revenue in Chicago rather than moving operations to other financial centers, as there were opportunities to do over the years.

Characterizing the new generation of Windy City traders, Heinz says the best will have a pioneering spirit as well as the heritage of being descended from traders or exchange workers. “They’ll have advanced degrees in math or computer science, and perhaps a track record of sorts, but they’ll have DNA of trading,” Heinz said. “The art of the possible is clear to people with that pedigree.”