Just 18 months after it shut down its nascent Twitter-based hedge fund, Derwent Capital Markets is back with its new offering—with the launch of what it says is the first social media-influenced trading platform.

The new spread-betting platform, called DCM Dealer, which went live from this week, includes a feature that calculates a real-time sentiment rating for individual stocks based on the millions of tweets that are generated on Twitter every day.

This scraping of social media sites to help traders predict the direction of markets is beginning to take off in the finance world, although London-based DCM says that theirs is the first such trading platform to be launched. 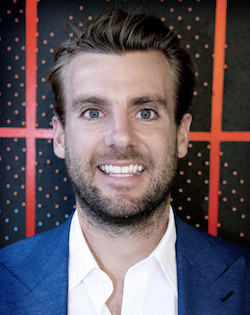 “Investors have already accepted for some time that financial markets are driven by greed and fear,” Paul Hawtin, founder and chief executive of DCM Capital, told Markets Media.

“What it will effectively do is allow a trader and investor for the first time to see underlying sentiment in that instrument in real time.”

Of the 8,000 equities, FX and commodities instruments that it follows, DCM Dealer gives each a rating of between zero and a maximum of 100.

“If someone is interested in Vodafone shares, we search for every single tweet with anything to do with Vodafone in it,” said Hawtin. “So the keyword is Vodafone, or any of the senior management team, and then what we do is we have a waiting system.

“So tweets that have more relevant keywords have a higher rating than tweets that would be less relevant—such as someone tweeting about their poor Vodafone reception, for instance, which would have a low rating.

“What we do is combine all of these tweets and we have an easy-to-understand output to make a decision from which is just a signal rating from zero to an extreme positivity of 100. It’s constantly fluctuating and updating every second so you can see sentiment changing.

“The whole concept of using social media to benefit your trading positions is gaining traction. Traders can get information overload and all sorts of analysis, but at the end of the day you need to make a binary decision whether to buy or sell. So we’ve tried to make it as simple as possible.” 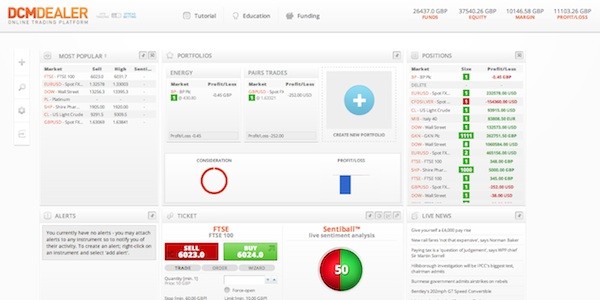 A screenshot of DCM Dealer, the new trading platform launched by DCM Capital

Aimed primarily at the retail trader, spread better or the contract for difference trader, Hawtin says DCM will soon be launching an analysis tool aimed at institutional traders using the same technology.

“With that, they will just get the raw data and but will be able to build their own trading strategies or do what they want with that data.”

Hawtin says that its algorithms will only mine Twitter for now. “Facebook is slightly more difficult to get the data as you can only really get hold of public status updates,” he said.

Others, too, are beginning to offer investors services revolving around the vast amounts of untapped data that can be found on Twitter.

Knowsis, a London-based technology start-up, offer firms a data feed service that is installed on a trader’s desktop providing real-time analysis of market conditions, asset classes and specific securities by mining every single tweet that is produced.

“The finance world has started to take notice of social media as a powerful platform for breaking news and views,” Oli Freeling-Wilkinson, chief executive of Knowsis, told Markets Media.

Hawtin at DCM, though, is quietly optimistic about DCM Dealer despite suffering an earlier Twitter-related setback.

In July 2011, DCM set up a Twitter-based hedge fund with £650,000 in initial funding and garnered market-beating returns of 1.86% in its first—and subsequently only—month of operation. With things looking up, and with around substantial funds in the pipeline from institutional investors, the following month of August witnessed the U.S. losing its triple-A rating for the first time in history as well as rioting across parts of England. This hostile trading environment quickly turned a success into anything but.

“Investors didn’t want to invest in anything apart from gold or government bonds—we couldn’t raise the money in the end,” said Hawtin.

“The underlying systems were working well but hedge funds need in excess of £25 million-plus to become commercially viable. Anything less than that it’s a struggle. It’s like the chicken and egg situation. No one wants to invest until you are up and running.

“So what we thought was we wanted to launch a business where we could remove that market risk so we didn’t want to have a product that was subject to global shocks or major events in the economy. With DCM Dealer, we are not making any investment decisions any more. It doesn’t really matter what happens in the market; we are being judged on our ability to provide a good platform with really interesting technical analysis.”