Rates trading is back.

After holding steady near historically low levels for what seemed like a very long time, interest rates recently surged amid heightened speculation that the U.S. Federal Reserve will soon wind down its massive quantitative easing program.

That ascent may continue, the move may reverse itself if the Fed stands pat, or most likely it will play out somewhere in between those two scenarios. But no matter the trajectory, renewed interest and speculation in the rates complex is good news for the traders who thrive on price fluctuations and the market operators that handle their order flow.

‘The 10-year U.S. Treasury yield went from about 165 to 300 basis points since May — that’s a big, big move,” said Michael Creadon, chief executive of Chicago-based proprietary trader Traditum. “Firms like volatility, and the move has a positive effect on trading. We are all benefitting.”

CME Group’s 10-month-old Deliverable Interest Rate Swap Futures (DSF) contract posted record volumes this week. “That’s the one you want to keep an eye on,” Creadon said. “Managers will want that instrument in their portfolios.”

DSF is shaping up as CME’s second-best  interest rate futures launch ever, noted Sean Tully interest rate product group managing director for the exchange. In terms of customer participation, there are more than 20 large open interest holders in the CFTC Commitment of Traders Report, and more than 30 for the 10-year duration, he stated. 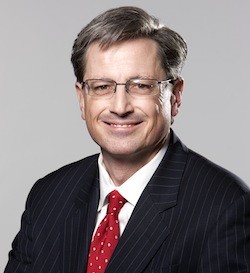 “We’ve had a huge volume uptick across the complex since May, with increased volatility sparking growth further out the (yield) curve,” Tully said, adding that OTC clearing is picking up rapidly.

Tully said CME has cleared for more than 300 different customers, and daily average clearing volume in August was $66 billion.

Rate trading has been more dynamic in recent months than it has been for several years, market participants and operators say. “Traders are funny — when nothing is happening, they are bored,” Creadon said. “We’ve swung to the other extreme with interest-rates trading, as it has been far more volatile lately.”

Partners in the 10-year-old Traditum Group have traded rate futures for decades, but there’s no blueprint for the current environment. “I remind our traders that no one has seen what happens when the market comes out of a zero interest rate environment,” Creadon said. “It wasn’t an easy ride in, and so we expect turbulence on the way out.”