US Exchanges Outperform on Volatility

Exchanges have reported record volumes as fears over the coronavirus has increased volatility and their share prices could continue to outperformance if the risk-off trade continues.

Kyle Voigt, an analyst at financial services boutique KBW, said in a report that US exchanges –  Intercontinental Exchange, Nasdaq, CME Group and CBOE – have outperformed the S&P 500 index by 10.4% since 19 February. In addition, European exchanges have outperformed their relevant benchmarks by 5.5% over the same time period.

“Last week, he highlighted ICE and CME as the two exchanges that screened the best, in terms of more room for additional outperformance should the risk-off trade continue,” the report added. “ICE is now up 3% and CME is up 4% versus the US exchange group roughly flat and the S&P down 4%.”

ICE ETF Hub was launched in October last year as an open architecture platform to increase efficiency, standardization and participation in the primary market for trading exchange-traded funds, where shares of ETFs are created and redeemed. Last month ICE said the hub would be connected to FIX, the standard messaging protocol, and launched a multi-order functionality which reduces human error and cuts transaction times down to seconds.

Exchanges have seen significant growth in their information services revenues from just over $1bn (€890m) in 2005 to more than $6bn last year according to a report from consultancy Opimas. The study, Exchanges and Market Data: How Much Money Is Being Made?, also noted that, in contrast, investment banks have seen their revenues shrink over the past decade. 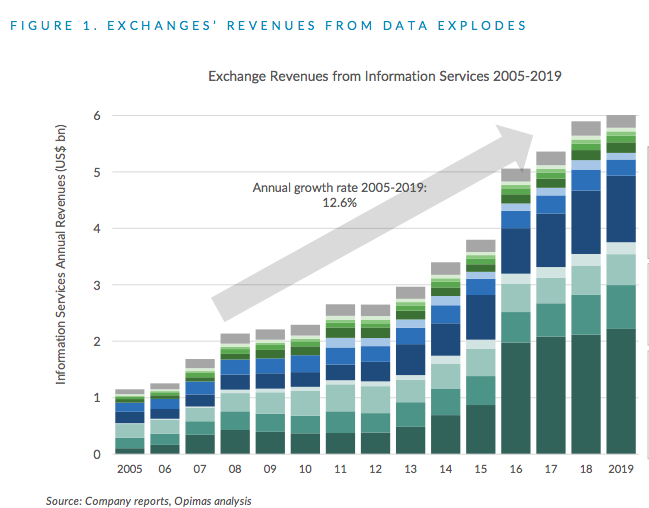 Octavio Marenzi, founder and chief executive of Opimas, said in the report: “The profitability of market data at exchanges is impressively high, and we estimate that exchanges are able to achieve an average operating margin of 76% in this line of business, significantly higher than the rest of their activities.”

He continued that exchanges’ profit margins are more than twice as high as market data vendors such as Bloomberg or Refinitiv, and more than three times as high as large investment banks.

However regulators in both the US and the European Union, are increasingly looking at exchanges’ market data revenues.

“They are preparing significant changes to regulation and market structure that will see exchanges’ market data revenues come under pressure,” warned Marenzi.