US Investors May Have to Write Off Russian Holdings

US investors may have to completely write off Russian holdings according to The Institute of International Finance, the global association of the financial industry.

The IIF said in a report, Russia Sanctions: Climbing the Escalation Ladder, that future market restrictions on trading local currency-denominated debt (OFZs) are likely to have more serious implications as last week’s actions exclude the trading of existing securities. Future measures could range from forbidding US financial institutions from trading in existing Russian domestic debt to a requirement to divest their holdings during a pre-specified grace period.

The report continued that in the more extreme scenario, US institutions could struggle to find an intermediary to facilitate their divestments, as the risk of running afoul of sanctions could prove too high.

“Consequently, US investors may have to write off holdings completely – inadvertently providing debt-relief to Russia and possibly substantially hurting the interests of their clients, which include large pension funds and public sector retirement systems,” added the report.

All Street SEVVA, an ESG ratings platform, said in a statement it will downgrade the overall rating of all stocks listed on the Moscow Stock Exchange to zero, in response to the Russian invasion of Ukraine. Sevva.ai uses artificial intelligence to automatically provide real time ratings for all public and private companies globally, based on the United Nations Sustainable Development Goals.

Emanuela Vartolomei, founder and chief executive of All Street, said: “Every company needs to do what it can to weaken Putin’s regime, and the decision by All Street reflects this. These events have brought suffering to innocent people, reignited Cold War fears and caused tens of thousands of desperate migrants to seek refuge across the border, not least in my home country of Romania.”

The IIF said sanctions will have a negligible impact on the asset management industry, similar to the one following US sanctions on the primary market for non-Ruble-denominated sovereign bonds, which had been imposed in August 2019.

However, Russia’s sovereign debt continues to make up a substantial share of local currency emerging market indices such as J.P. Morgan’s Government Bond Index (GBI) series. “While Russia’s weight has declined in recent years (to 7.5%), this is largely a result of the inclusion of Chinese bonds since early 2020,” added the IIF.

In the equity and derivatives markets, the Bank of Russia said in a statement that it has decided not to resume trading sessions in MOEX Equity, Derivatives, and Standardised OTC Derivative markets on 1 March 2022. The central bank said the trading schedule of the Moscow Exchange for 2 March 2022 will be published on the Bank of Russia website on that day before 9:00 Moscow time.

Bloomberg reported that BlackRock is halting creations for its Russia ETF.

JUST IN: Blackrock is halting creations for its Russia ETF (ERUS) and has removed all Russian stocks from all its creation baskets, incl big dogs like $IEMG & $EEM, altho the stocks will remain in the funds. VanEck (RSX) still open for now altho is using special baskets. pic.twitter.com/VOITTXeAzk

Index provider MSCI said in a statement on February 28 that it continues to closely monitor the accessibility and investability of the Russian equity market for international institutional investors given sanctions on individual companies, restrictions on the sale of securities on the Moscow exchange, exclusion of Russian banks from SWIFT, closure of the Moscow Exchange, and deterioration in the convertibility of the Russian Ruble into foreign currencies.

“In view of these developments, MSCI seeks feedback from market participants on the appropriate treatment of the Russian equity market within MSCI indexes up to and including the potential reclassification of the MSCI Russia Indexes from Emerging Markets to Standalone Markets status,” said the statement. “MSCI will issue further communication before the end of the week following the review of feedback from market participants.”

Russia’s banking system is highly concentrated and dominated by state-controlled institutions, with foreign banks not systemically important according to the IIF.

“Foreign banks play a minor role, holding only 6.3% of total assets,” said the report. ”While Russia remains an essential source of revenue for some international institutions, their exposure to the country does not appear systemic relative to their total assets.” 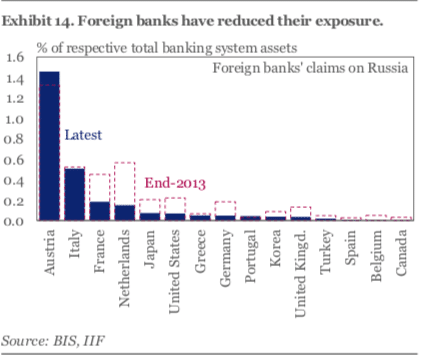 The IIF also highlighted that while the primary purpose of sovereign debt sanctions is to limit access to funding for the Russian government, indirect effects such as on banking system liquidity cannot be ruled out.

“For the first time since 2017, the system actually experienced periods of structural liquidity deficits: in early 2021 and most recently following the invasion of Ukraine,” said the report. “These developments may have important implications for the banking system’s ability to roll over existing debt and buy out foreign investors’ holdings if necessary.”

On February 26 it was announced that several Russian banks would be removed from SWIFT, the global financial messaging system. The IIF said Western allies seem to have opted for a targeted approach, leaving room for continued trade settlements for European imports of Russian energy.

“But the number and systemic nature of the institutions chosen for SWIFT-related sanctions will still matter significantly for the impact on Russia’s banking system and the broader economy,” added the IIF. “Uncertainty surrounding the possible future inclusion of additional institutions alone, however, will put pressure on the entire financial system, resulting in an exacerbation of already-occurring bank runs and, specifically, a rush on foreign exchange in light of expected Ruble depreciation.”

Marc Rubinstein, a former hedge fund manager, said in his Net Interest newsletter that Europe may not want to completely cut Russian banks out of SWIFT for several reasons. They fear that a competitor to SWIFT could emerge from Russia and China and a carve-out has been agreed for energy with Gazprombank, which processes payments for energy company Gazprom, excluded from bank-specific sanctions.

Gazprom again halved in value in terms of its London listing today – seems to have a half-life of a day. Sberbank down below $0.90 a share in London, having been $15 a fortnight ago. Rouble off lows but still worth less than a cent pic.twitter.com/d1eWr9skpg

The IIF highlighted that more drastic sanctions are possible including further tightening of Russian banks’ access to US dollars and euros, expanding the removal from SWIFT to additional institutions, sanctioning the secondary market for existing OFZ, and/or cutting off energy imports from Russia.

“Furthermore, we believe that the CBR will have to institute strict capital controls and possibly declare a bank holiday as bank runs accelerate and demand for foreign exchange continues to rise sharply,” added the IIF. “As a result, we anticipate seeing negative growth in an economy that has already been hindered by increasing isolationism.”