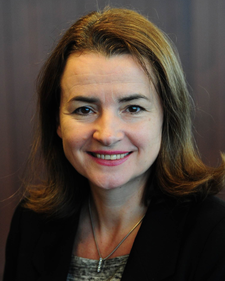 Joanna Cound, head of Emea government relations and public policy at BlackRock, spoke to the International Capital Markets Association for Icma’s review of its Asset Management and Investors Council Conference in London this week. Amic was established as an independent voice for the buy side within Icma and, since then, buy-side representation on Icma board has increased, including Cound.

Cound said there is no such a thing as a single European corporate bond market, as trading is fragmented and thousands of bonds of varying maturities are illiquid. This increases costs for European companies and end-user investors alike.

“Delivering MiFID II and MiFIR and ensuring that the provisions relating to post-trade infrastructure connectivity are fully implemented – and where necessary enforced – will go some way to address this situation,” she added.

Virginie O’Shea and Pablo Valderrabano at consultancy Aite Group estimated in a report that spending on pricing and reference data vendor feeds in the fixed income market will reach $3.5 bn in 2018 from $3.06bn last year. Aite Group surveyed operations and technology executives engaged in the oversight of evaluated pricing for fixed income instruments at 29 financial institutions globally.

Cound added that regulations and technology are changing the practices and behaviour of European bond market trading and the toolkit to operate within it.

“We do not expect a single model or platform to be suited to all types of trades,” she said. “Something that is clear, however, is that a flexible and scalable model is emerging; one that allows participants to choose a strategy and venue based on the characteristics of the trade.”

For example, last week Euronext announced a 10-year partnership with Algomi to deploy the bond information network’s technology for a new multilateral trading facility. Euronext has invested $2.3m (€2.1m) in the joint venture and will own and operate the MTF.

Cound said many of the discussions relating to market liquidity reflect an ongoing evolution of global bond markets as bank lending is impaired and regulators push to grow the public debt markets.The European Commission’s forthcoming assessment of the corporate bond markets as part of the Capital Markets Union is due this quarter together with the review of the cumulative impact of regulation.

She added: “Reforms have indeed reduced dealer inventories, and low-interest rates have given rise to record issuance, which has resulted in vast numbers of bonds, and this combined effect has further fragmented liquidity. As banks curtail their market making activities, execution risk is shifting from banks (where they no longer act as principal) and is increasingly borne by end-investors.”

These end-investors are also being asked to commit more capital to markets through the CMU initiative, so  fixed income markets need to function efficiently. She recommended that the CMU should consider introducing measures to gradually increase institutional allocations into corporate bonds, and help institutional investors widen their corporate bond portfolios by allowing more flexible measures.

Cound continued that the rise of bond exchange-traded funds in Europe provides a source of bond market liquidity, and the scope for future development is significant.

“ETF liquidity is incremental to the underlying bond market liquidity because buyers and sellers can offset each other’s transactions without necessarily having to trade in the underlying market,” Cound said. “Even during periods of market stress, ETF shares are at least as liquid as the underlying portfolio securities.”

She continued that European domiciled ETFs hold roughly €38bn ($41bn) in euro corporate bonds both from the euro area and international issuers, split between €31bn of investment grade and €6.4bn of high-yield focused ETFs. Could said: “To put that in context, this is less than direct household investments in euro non-financial corporate bonds coming from countries with high savings rates, such as Germany and Italy, and those with a culture of holding securities, such as Belgium, Italy and Spain.”

MiFID II will introduce trade reporting and post-trade transparency in the ETF market which Cound said will enhance the perception of liquidity in European domiciled ETFs as the majority of trades are currently over-the-counter.

“Other key drivers of growth for this market will likely include standardised risk and trading metrics, larger lending pools of ETFs, the development of derivatives in ETFs, as well as increased acceptance as collateral in OTC transactions,” added Cound.

In the first nine months of this year fixed income ETFs/ETPs had record year-to-date inflows of $100.7bn, 56% more than the previous high of $64.1bn,which was set last year according to ETFGI, the research and consultancy firm.

The fixed income flows contributed to total net inflows of $238.12bn in the first nine months of the year, slightly down from the $251.67bn gathered in the same period sat year. Equities had inflows of $85.55bn while commodities gathered record year-to-date assets of $36.55bn, overtaking the previous record from 2012.

In the first three-quarters of this year assets invested in ETFs/ETPs listed globally reached a record of $3.408 trillion according to preliminary data from ETFGI’s September 2016 global ETF and ETP industry insights report.