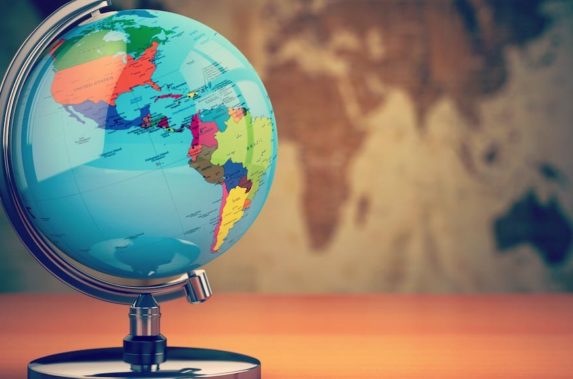 In an investment climate that’s as uncertain as ever, the Connecticut Retirement Plans and Trust Funds maintains a couple theses: one, interest rates will rise, and two, international investing will win out in the end.

The $29 billion public-pension organization has positioned itself for both eventualities, by reducing exposure to fixed-income securities that are most sensitive to interest-rate movements, and sitting tight on a comparatively high allocation to global markets, despite some recent underperformance vis-a-vis the U.S.

“We have more of a global tilt than our peers,” said Lee Ann Palladino, chief investment officer for the Office of the Connecticut State Treasurer, which oversees the CRPTF. “We are sticking to our knitting in terms of our global diversification because, as long-term investors, we believe that over time we will achieve better risk-adjusted returns.”

The Treasurer’s Office manages 15 plans and trusts — about 90% of the total assets under management are represented by the $15.8 billion Teachers’ Retirement Fund and the $10.4 billion State Employees’ Retirement Fund, which have similar asset allocations. The CRPTF utilizes a principal fiduciary model, under which Connecticut State Treasurer Denise L. Nappier is tasked with decision-making authority. “I operate within this framework,” Palladino said. “I advise her and make recommendations, but she ultimately makes the decisions.”

As of December 31, 2014, the Teachers’ Retirement Fund had a 24.3% allocation to U.S. equity, 20.5% to non-U.S. developed-market equity, and 8.7% in emerging-market equity. In fixed income, a core portfolio benchmarked to the Barclays U.S. Aggregate Bond Index had a 7.5% allocation, followed by liquidity with 5.4%, emerging markets with 5%, high yield with 4.6%, and inflation-linked with 3.1%. The alternatives portfolio consisted of private equity at 9.4%, a bucket consisting mostly of funds of hedge funds at 5.9%, and real estate at 5.8%.

The CRPTF completed an asset-allocation study in 2012, which took into account the macro outlook for financial markets, as well as organization-specific challenges such as a funding ratio that Standard & Poor’s subsequently pegged at 49.1% in a 2014 report.

“One of the key elements that informed our asset allocation was the recognition that investment returns alone would not materially resolve the funding challenges that face the state of Connecticut, or for that matter many other public pension plans,” Palladino told Markets Media in a Feb. 20 telephone interview. “We do, however, continue to have the expectation that the State will fulfill its statutory obligation to appropriate the actuarially recommended contribution to the pension plans.”

The CRPTF invests on behalf of about 212,175 individuals, spanning 110,400 active teachers, state and municipal employees, 87,200 retirees, and 14,500 inactive members. Like all public-pension plans whose end users may range from 22 to 102 years of age, the organization must balance very long-term investing goals with ongoing current distributions.

“Our plan demographics are such that we have an older population, which underscores our need for liquidity and for the portfolio to perform well under a variety of economic scenarios. This was on our minds as we went through the asset-allocation study,” said Palladino, who holds the Chartered Financial Analyst (CFA) and Chartered Alternative Investment Analyst (CAIA) designations. “The major move was an overall reduction in public markets by about 8%, with half coming from equities and half from fixed income. In turn we increased our alternatives by 8%.” 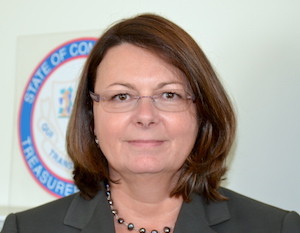 “Due to concern about interest rates, we reduced core and inflation-linked bonds, and we increased high yield and emerging-market debt,” she continued. “We increased real estate by 2% and hedge funds and real assets by 6%. Our thinking was to provide more stable asset valuations to give us more downside protection, increased cash generation and stronger risk-adjusted returns.”

Since the March 2009 market nadir following the global financial crisis of 2008-2009, U.S. market performance has soundly beaten that of developed markets in Europe and emerging markets worldwide. That hasn’t helped the CRPTF’s relative performance over the past half-decade, but Palladino isn’t wavering.

“The market opportunity set is global,” she said. “Diversification comes with a cost-benefit to investors, as all asset classes have periods of over and under performance. In our case, because we have a global bias, the cost is some recent underperformance. But over the past 10 years, our emerging-market allocations have been some of the strongest-performing areas in our portfolio.”

The market opportunity set is global

Howard Pohl, senior consultant at The Bogdahn Group, noted that forward price-earnings ratios are lower internationally than they are domestically, which suggests an investment opportunity. “International is a place you should be, but how much depends on the specifics of the organization,” he said.

Regarding interest rates, many pension plans have been steeling themselves for an upturn for a few years now, but it has yet to happen. Moving more into non-core areas of fixed income can boost diversification, but such a strategy won’t necessarily reduce interest-rate risk unless duration is lowered in the process, said Pohl, who spoke generally about pension investing and not specifically to the CRPTF.

As of year-end 2013, the CRPTF was the No. 144 biggest pension plan in the world, bigger than State Farm’s but smaller than Hewlett-Packard’s, according to a Pensions & Investments / Towers Watson report published in September 2014. Among U.S. public pension plans, it ranked No. 37, between Employees Retirement System of Texas and Utah Retirement Systems.

Palladino was named chief investment officer in May 2011, following 19 months as deputy CIO. Prior to joining the State of Connecticut’s Office of the Treasurer in 2005, she served as CIO at federal credit unions in Connecticut and New York for about a dozen years, after starting her career at NESB Corp., parent of New England Savings Bank, in the 1980s.

“I would summarize my accomplishments (at the CRPTF) as focusing on a very structured and disciplined investment oversight process, and attempting to increase returns at the margin, both through the reduction of fees and improving the portfolios,” said Palladino, who oversees 12 investment professionals. “We focus on the long-term horizon but also employ a strategy that carefully and tactically positions us for the short term.”

Interest-rate risk has been a big concern during Palladino’s time as CIO. Yield on the benchmark 10-year Treasury note was near 3.5% four years ago, a bit low by historical standards but still reasonable for fixed-income investors. But the yield slid to as low as 1.4% in 2012 and remains paltry at 2.2% as of March 9, 2015.

For the CRPTF and other institutional investors, the concern is that fixed-income investments will decline in value as interest rates rise, as is expected when the U.S. Federal Reserve comes off pause mode sometime this year. “We developed and implemented a strategy to use opportunistic allocations within our core fixed-income funds,” Palladino explained. “The goal is to mitigate interest-rate risk and protect capital.”

Specifically, the newly implemented strategy frees up hedge-fund managers in the CRPTF’s core fixed income portfolio to deploy floating-rate instruments, short-duration instruments, credit products, and long-short strategies. “This is going to be a key part of our portfolio going forward,” Palladino said. “We know rates are going to rise. We don’t want to get hit by the oncoming train.”

Palladino also has emphasized discipline and the importance of not only generating, but also preserving every single basis point of return, which represents $2.9 million for a $29 billion plan.  To that end, she and her team meet with their public-market managers every year, intensively reviewing performance and how they fit in the broader portfolio, and talking fees.

“We are constantly realigning our portfolios to perform better,” Palladino said, noting that tactical overweight and underweight positions added 73 basis points to the bottom line over the past three years.  “This keeps our feet to the fire and our focus on achieving our goals over the long term.”

The CRPTF reported $84.3 million in total expenses for the fiscal year ended June 30, 2014, of which $71.9 million went toward investment advisory fees. “Every time we meet with managers, we ask them to attest in writing that our fee is the lowest, and we ask them to reduce it,” Palladino said. “We have been very successful in terms of fee reductions, and we’ve had a similar discipline toward our private partnership portfolios.”

With regard to risk — encompassing operational and investment — Palladino said “we have begun a system-wide view on how risk management can be embedded into all aspects of the investment process, including asset allocation, manager oversight, and liability management.”

“We’re evaluating our risk-management systems,” she said. “Having recently changed custodians, we’ve enhanced our tools and technology, and we’re also looking at best practices and other things we can implement from an operational perspective.”

“In terms of investment risk, we’re very methodical about how we invest, but market events are going to happen such as evolving monetary policy, exogenous shocks, etc. that will affect our portfolio over both short and long-term horizons,” Palladino continued. “We want to utilize scenario analysis and other risk-management strategies that can help us make more informed investment decisions.”

The Teachers’ Retirement Fund has a stipulated 8.5% annual rate of return, while the State Employees’ Retirement Fund must generate 8% per year. The CRPTF cleared this hurdle over the previous five-year period, but fell a couple percentage points short over the past decade, which included the market meltdown of 2008-2009.

Looking at the return outlook over the next few years, Palladino doesn’t see much low-hanging fruit. “It’s going to be a very difficult market for investors, because there’s a low opportunity set out there across the asset classes in which we invest,” she said.

Palladino, a graduate of Skidmore College, lives with her husband Michael in Old Saybrook, CT. Together they raised their four children. She met Michael nearly 20 years ago at a charitable golf outing, and they still enjoy hitting the links.

Financial regulation has been a huge topic for market participants over the past half-decade, as regulators in the U.S. and Europe have implemented swaths of new rules aimed at shoring up a system that some believed was too lax. Pension plans themselves aren’t the target of regulators, but as institutional asset owners that need investment and trading services, they can’t help but be affected.

Palladino said based on conversations with CRPTF managers, the Dodd-Frank Act holds implications for the organization in three ways. One, the so-called Volcker Rule, that essentially prohibits banks from proprietary trading, has opened up opportunities for some of the CRPTF’s private-equity and real-estate funds who engage in that business. Two, some previously unregistered hedge funds and private-equity managers are now required to register with the U.S. Securities and Exchange Commission, which allows the CRPTF to gain more insights into the firms.

The third and most significant effect seems to be in fixed-income markets, specifically in how regulation has capital-constrained the big banks that historically had been the dominant players. “Markets are less liquid due to the fact that banks are not holding as much inventory,” Palladino said. “A lot of our fixed income managers are concerned with liquidity risk…We are watching this very carefully, and we have a liquidity strategy in place to protect against liquidity risk.”

“In general with regulation, more transparency and oversight is positive,” she said.

Going forward, Palladino cited an aging population and a low-opportunity marketplace among challenges faced by pension plans. “I think we’re going to have a shift towards more outcome-oriented strategies, given the fact that the market opportunity isn’t all that bountiful,” she said. “We’re going to have to focus on what it is we’re trying to accomplish.”

Opportunities include technological advances that will lead to better access to information and more efficiency, and ESG, or investing with environmental, social and governance criteria. “Throughout her administration, Treasurer Nappier has been a key proponent of ESG,” Palladino said. “Those companies that position themselves with solid corporate governance and that have the foresight to properly position their business against risks such as the environment, and those companies that take advantage of diverse pools of talent, are going to be best-positioned for the future.”