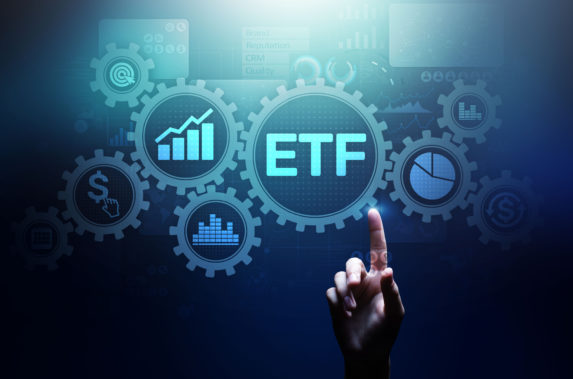 BlackRock’s exchange-traded fund franchise, iShares, has reached more than $3 (€3.5bn) trillion in assets under management and growth is expected to accelerate over the coming decades.

Laurence Fink, chairman and chief executive of BlackRock, said on the results call on 14 July that ETF assets under management went past $3 trillion globally, driven by net inflows of $75bn in the second quarter.

He highlighted that the majority of growth has been organic as more investors use ETFs in new ways, such as to build whole portfolios and to track new indexes that are not just weighted by market cap.

More than half of the ETF net inflows in the second quarter were in fixed income and and sustainable products.

iShares had $22bn of net inflows in fixed income ETFs in the second quarter as investors sought a broad range of exposure, including Chinese bonds, municipal bonds and inflation-linked products.

“We now manage more than $700bn in fixed income ETFs and continue to believe that this category will grow to $1 trillion by 2024,” said Fink.

He continued there is significant room for continued growth in ETFs as penetration is only at about 5% of the equity market and 1% of the bond market.

Assets invested in ETFs and ETPs listed globally reached a record $9.35 trillion at the end of first half of this year according to ETFGI, an  independent research and consultancy firm.

Fink continued that momentum in sustainable ETFs remained strong with $14bn of net inflows in the second quarter.

In April BlackRock launched two active sustainable ETFs for the transition to a low-carbon economy which raised more than $1.5bn.

The BlackRock U.S. Carbon Transition Readiness ETF (LCTU) and the BlackRock World ex U.S. Carbon Transition Readiness ETF (LCTD) invest in large- and mid-cap companies, tilting toward those companies that BlackRock believes are better positioned to benefit from the transition to a low-carbon economy.  Blackrock said in a statement: “The day-one investments into LCTU make it the largest ETF launch ever.” 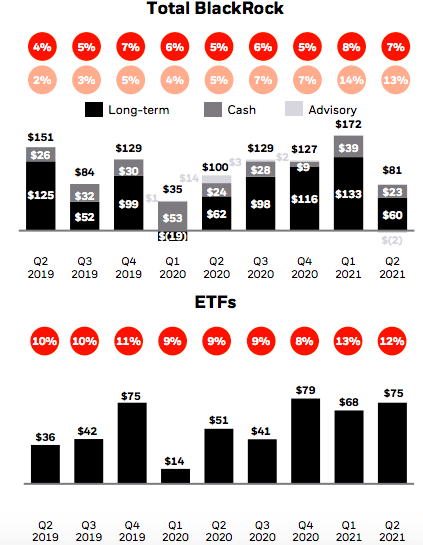 Fink continued that BlackRock had net inflows flows of $40bn into  sustainable products in the first half of this year, compared to $46bn in all of 2020.

“With nearly $120bn in sustainable ETFs, Blackrock is four times the size of the next player and we are incredibly well positioned in this fast-growing category,” he added.

“Sustainable investments offers significant opportunities to generate alpha for clients, and we are focused on innovating ahead of their needs,” added Fink.

This month BlackRock announced it had secured more than $250m in commitments from a consortium of global institutional investors, governments and philanthropies for the Climate Finance Partnership, a blended finance vehicle investing in climate infrastructure across emerging markets in order to accelerate the global transition to a low carbon economy.

Fink said: “This strategy is a great example of how public and private sectors can come together to deliver positive environmental and socially impact for communities as well as offer attractive risk-adjusted returns to clients.”

Additionally BlackRock will continue to invest in technology platform Aladdin Climate to provide data to help clients measure their impact and sustainable factors on their portfolios.

Our Chairman and CEO, Larry Fink, spoke at The Venice International Conference on Climate @g20org about moving from ambition to action on net zero and 3 critical areas that must be addressed: https://t.co/SbI4Sh7QZx #G20Italy pic.twitter.com/Sf4wzDt63Z

In June BlackRock announced it was acquiring and integrating Baringa’s Climate Change Scenario Model into its Aladdin Climate technology.

“This partnership is a significant milestone for Aladdin Climate and will set a new bar in the industry for climate analytics and risk management tools,” added Fink.

In June this year British Airways Pensions announced the appointment of BlackRock as the outsourced chief investment officer (OCIO) for approximately £21.5bn ($30bn) of its pension schemes’ assets. BlackRock said BA Pensions’ decision to appoint an external investment manager is the first of its kind in the UK pensions industry at this scale.

The scheme serves more than 85,000 members and had been managed by an in-house provider.

BlackRock said regulation has intensified, operational costs have risen, and investment complexity has increased – so many UK pension schemes are looking externally for investment management capabilities.

“Alongside these external drivers, the schemes have continued to mature, and their investment needs have changed considerably, requiring an increased focus on managing investments to provide an income that matches members’ pension benefits,” added the asset manager.

We’re proud to have been appointed by @British_Airways Pensions to serve its 85k scheme members to secure their income needs in #retirement. pic.twitter.com/BfVp8Q1FLg

Fink said the British Airways partnership will be a catalyst for a transformation in the industry.

“We manage over $200bn dollars in OCIO assets today,” he added. “I believe the trend towards outsourcing will only continue to accelerate.”

In addition, he highlighted increased demand for personalization among financial advisors and wealth clients.

This week BlackRock announced it was making a minority investment in SpiderRock Advisors to expand access for wealth firms and financial advisors to professionally managed, options-based separately managed account strategies.

“This venture builds on BlackRock’s position as a market leader in personalized SMAs, including the recent acquisition of Aperio,” said BlackRock.

Rob Kapito, president of BlackRock, said on the call that the firm had built a pipeline of over $6bn in potential new Aperio mandates since the transaction closed in February this year.

“This is an example of how we are getting more into the personalization and direct indexing,”added Kapito.

BlackRock’s assets surged to a record $9.5 trillion in Q2, up from less than $5 trillion six years ago. pic.twitter.com/004frpb6Vf

BlackRock had a total of $81bn of total net inflows in the second quarter which the firm said was driven by continued momentum across the platform, and reflects a previously announced $58bn low-fee institutional index outflow related to a single client, representing 4% annualised organic asset growth.

There was $63bn of active net inflows across all product types, including equity, fixed income, multi-asset and alternatives.

An even crazier part of BlackRock's growth is that it's not driven by one client group, region or product in particular. AUM and base fees have doubled since 2016 but mix has stayed relatively constant.

Fink also said the asset manager is giving employees an 8% raise in base salary, up to and including director levels, from September 2021.

“Over the last 12 months we had over $500bn of net inflows,” Fink said. “This is driving strong financial performance, and I’m very confident that we have significant room to grow. We are partnering with more clients on larger and more comprehensive mandates than ever before in our history.”