More Than Half of US Dollar Derivatives Adopt SOFR

The adoption of SOFR has reached more than half the US dollar derivatives market as the use of risk-free rates also reached an all-time high.

SOFR is now over half the market https://t.co/d3qtfoCr8T

The ISDA-Clarus RFR Adoption Indicator tracks how much global trading activity (as measured by DV01) is conducted in cleared over-the-counter and exchange-traded interest rate derivatives that reference the identified risk-free rates in six major currencies. The indicator showed that 50.1% of US dollar interest rate derivative DV01 was transacted in SOFR in May 2022.

In addition, the ISDA-Clarus RFR Adoption Indicator jumped to an all-time high of 46% during the month. Barnes added that May 2022 was the fourteenth consecutive monthly increase in risk-free rates adoption since March 2021. 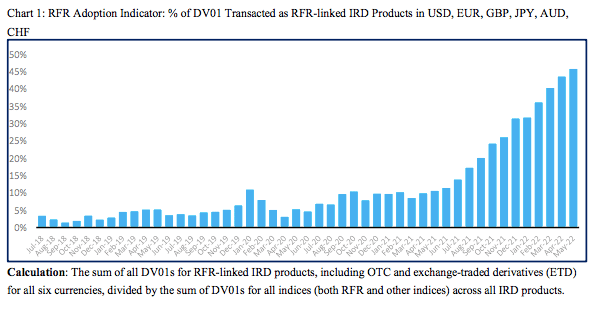 Libor was discontinued at the end of 2021 for all euro, Swiss franc and Japanese yen tenors, the overnight/spot next, 1-week, 2-month and 12-month sterling; and the 1-week and 2-month US dollar settings. The use of US dollar Libor in new contracts was banned from the end of 2021, with limited exceptions, and the remaining five US dollar Libor settings will continue to be calculated using panel bank submissions until mid-2023.

Barnes said virtually all trading is now in RFRs for Swiss franc, Japanese yen and sterling and there is little reason to expect this to change.

In another sign of the encouragement to shift to SOFR, CME Group announced in May that it would launch a SOFR First for Options initiative for June and July of this year. The exchange said it will be taking additional steps to build on the growth seen in SOFR futures to help significantly increase SOFR options trading including a market-wide fee waiver for SOFR options and additional market making incentives during these two months to help enhance liquidity in all venues. 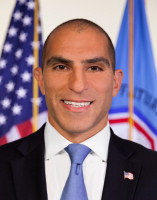 Rostin Behnam, Chairman of the U.S. Commodity Futures Trading Commission, said in a statement: “The transition of exchange-traded options to SOFR is another important milestone and step forward in the shift away from US dollar Libor. Increasing SOFR options trading will further develop overall SOFR derivatives liquidity and bolster the transition effort as we focus our collective efforts on the last 12 months of Libor.”

CME reported record SOFR options average daily volume in May, including a single-day trading volume record of 397,212 contracts on May 25 and record open interest of 4.1 million contracts on May 31.

#SOFR options, we have liftoff. pic.twitter.com/RQphQtGpLd

In June Tradeweb Markets, the operator of electronic marketplaces for rates, credit, equities and money markets, announced it has completed the first-ever fully electronic institutional SOFR swaption trade. A swaption allows participants the ability to opt into an interest rate swap contract.

Goldman Sachs and Caisse de dépôt et de placement du Québec (CDPQ), the Canadian pension fund, were counterparties on the trade, which was executed on the Tradeweb Swap Execution Facility. Since the completion of the inaugural trade, 15 dealers are now providing swaptions pricing on TW SEF.