SkyBridge Capital isn’t shy about getting behind its best ideas

Back in 2005, Ray Nolte looked at the fund-of-hedge-fund business and saw a lot of uniformity and conservatism, with too many unimaginative portfolios along the lines of 50 managers allocated at 2% each.

Then head of Citigroup’s hedge-fund management group, Nolte broke the mold by winnowing the number of funds, while more strongly backing the most promising ones. The change jump-started a stagnant business that was sold to SkyBridge Capital in 2010.

“We are more concentrated in our highest-conviction ideas, and are willing to shift the portfolio around in a much more dramatic fashion than was the industry norm,” said Nolte, now co-managing partner and chief investment officer at SkyBridge. “This process we created has added value for clients.”

SkyBridge manages $5.1 billion, mostly in two co-mingled products that include a U.S. fund with almost 25,000 investors, and an offshore fund. There are also separate accounts for high net worth individuals and institutions. The firm advises on another $3.4 billion, by conducting manager research and operational due diligence.

The 52-employee firm is best known for its charismatic and media-savvy founder and co-managing partner, Anthony Scaramucci, and its signature SkyBridge Alternatives (SALT) conference, which has attracted luminaries including former U.S. Presidents Bill Clinton and George W. Bush, actor Al Pacino, and restaurateur Wolfgang Puck, as well as a host of big names in the financial space. But its core business is investing in hedge funds. 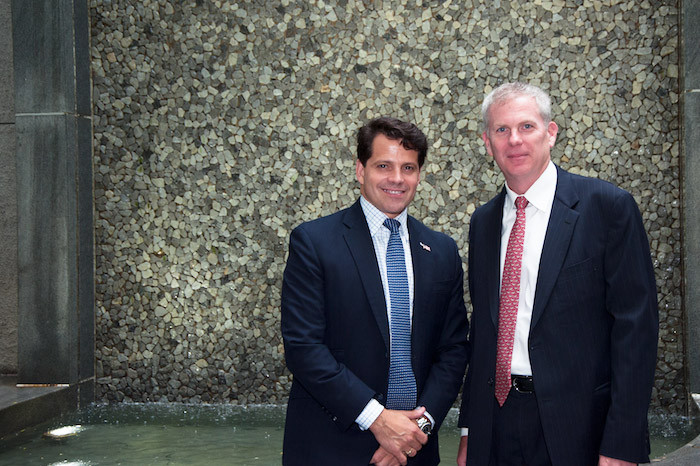 Nolte argues that strong operations and investment due diligence have become de rigueur in the hedge-fund space in the wake of the global financial crisis and Bernard Madoff scandal of five years ago, so differentiation must come from elsewhere. SkyBridge has differentiated itself by being in the vanguard of what he calls ‘fund of funds 3.0’.

Fund of funds 1.0, the standard business model at the inception of the industry around the late 1980s, typically would include the ‘who’s who’ of the hedge-fund industry such as Soros, Tudor, and Tiger. Fund of funds 2.0 came about in the 1990s, amid more institutionalization and a more systematic methodology. “You started to have an asset-allocation process and a manager-selection process,” Nolte said.

But variation in allocations was limited, and fund of funds 2.0 performance often tracked hedge-fund indices. “The industry is still very much like that today,” Nolte told Markets Media in an Aug. 13 interview from SkyBridge’s office in midtown Manhattan.

“Look at the opportunity sets that exist in hedge funds, and if we have high conviction in a theme or idea, we should scale that up. If we don’t like a given strategy, we won’t allocate capital.”

For example, SkyBridge has had “low single digits” allocated to long-short equity strategies over the past couple years. “Most funds of funds had significantly more exposure,” Nolte said. Conversely, relative value fixed-income arbitrage was SkyBridge’s highest-conviction idea, and as much as 40% of the firm’s assets was allocated to the strategy in 2012.

“We thought that’s where the best risk-adjusted uncorrelated returns would come from, so we put capital to work there,” Nolte said.

SkyBridge also is wont to concentrate positions in hedge-fund managers, up to as much as 15% of market value. Nolte cited a big current position in Dan Loeb’s Third Point LLC, and another in John Paulson’s Recovery Fund, which had gained a reported 35% this year through July.

Starting late last year, “we liked the themes (Paulson) was playing, which were financials through banks and insurance companies, and real-estate-related assets through private companies such as Extended Stay,” Nolte said. “That’s a very thematic trade where what they were doing was consistent with where we saw the opportunity from a markets perspective, and we found a manager that was well-positioned to capture that.”

SkyBridge measures its investment performance against three broad benchmarks: hedge-fund indices including the HFR Fund of Funds Composite Index and the HFR Global Hedge Funds Index; traditional market indices such as the Standard & Poor’s 500 and the Barclays Aggregate Bond Index; and fund-of-funds peers that SkyBridge competes with for bandwidth on the same distribution platforms.

Nolte noted that the S&P 500 and Barclays Ag are not direct competitors. Rather, “these are important because our clients typically own stocks and bonds, and one of our mandates is to seek to diversify those client portfolios,” he said. “We are not a replacement for bonds or stocks. In a rapidly rising equity market, we will underperform equities.”

“The question is, what is our correlation to equities?” Nolte continued. “If our clients are just positive on equities, that’s what they should buy. But if you look at a typical investor who owns stocks, bonds and cash, it’s all about making that portfolio more efficient and improving the risk-adjusted return.”

SkyBridge’s assets typically have a correlation of about 0.5 with equities, which is generally considered at the high end of low correlation. The correlation with bonds is near 0. “If you put this in a mix of stocks and bonds, overall it’s very helpful in moving a portfolio up the efficient frontier,” Nolte said.

SkyBridge deploys a multi-faceted approach in selecting and retaining hedge fund managers. A fund’s investment strategy must be in-line with SkyBridge’s view of the world, and the managers must pass muster on their processes, pedigree, and ‘edge’.

“Separately, we have an operational due diligence team that evaluates the funds from a non-investment standpoint,” Nolte said. “You want to put resources behind dealing with funds that have sound businesses, the right infrastructure, the right policies and procedures, and the right controls. If you look at hedge funds over time, the biggest losses have come from the frauds or operational blow-ups.”

As would be expected for an investment firm founded by Scaramucci, the global economy and its outlook is an important starting point for SkyBridge’s investment decisions.

The firm is reasonably constructive on the ‘big picture’. Nolte expects the U.S. economy to continue a gradual recovery, with annualized expansion rates of 2% to 2.5% and modest job-market improvement. Some areas of Europe that were in recession are beginning to stabilize, but recovery will be a multi-year process, and China’s growth will continue to slow, which will weigh on other Asian economies.
“The U.S. is one of the best places to be for equities,” Nolte said.

SkyBridge is sanguine about the U.S. Federal Reserve winding down its quantitative easing program, possibly the biggest overhang in the markets currently.

“If the Fed tapers that’s probably a good thing, because it means economies are doing better,” Nolte said. “And taper doesn’t mean tighten — it’s still added liquidity. Ultimately the economy needs to be self-sustaining. We should be happy if it’s self-sustaining, with less Fed involvement. And the Fed has ways to let QE wind down and shrink the balance sheet over an extended period of time, I think they’ll be thoughtful and slow. Of course, that doesn’t mean it will be a smooth process.”

For his part, Scaramucci is watching the U.S. drive toward energy independence, with some wariness for its broader — but not well understood — implications.

“The clear winners are North American consumers and manufacturing companies,” Scaramucci told Markets Media in an e-mail. “However, the potential for additionally destabilizing oil-producing nations is also very clear.”

“Most experts predict that oil producing nations need at least $100/barrel oil price going forward to break even. In the event that oil falls and stays significantly below this level, recent turmoil in the Middle East and Russian adventurism could be further amplified,” Scaramucci explained. “This would then have further negative risk-off consequences for capital markets. All in all, the energy revolution is a substantial net positive for the world, but it could potentially exacerbate an already intractable region.”

SkyBridge expanded its SALT conference franchise last year, adding a Singapore autumn conference to go with its mainstay Las Vegas spring event. The 1,800 conference delegates at the 2013 Las Vegas SALT is six to ten times the attendance of many other investment-themed conferences, and SkyBridge makes a point to make SALT’s content about much more than just hedge funds.

“We go out of our way to not talk about what we do — it’s not a commercial, we’re not trying to make a sale,” Nolte said. “The conference is about giving the industry a broader platform to discuss what it does, bringing people in the industry together, and making it about thought leadership…For us, the value is getting our brand and name known.”

Hedge funds generally have had a bit of a tailwind in recent years, as yield-starved institutional investors turned to alternative investments. “If you’re an institution or a pension fund, you might have an actuarial rate you need to hit to keep your plan funded,” Nolte said. “In today’s environment for bonds, it’s hard to hit any actuarial rate, so where do you go? Do you put it all in equities?”

“We think hedge funds, subject to an appropriate level of diligence, whether through funds of funds or direct investing, have a higher probability of achieving those return targets and should benefit from not being correlated to traditional asset classes,” he added.

Nolte noted that aggregate hedge-fund assets have trended higher, but the fund-of-funds business has only held about steady. “I do think the crisis made people question if they are getting the due diligence they’re paying for when X, Y, and Z funds had (Bernard) Madoff or (Thomas) Petters or another problem.”

With many weaker firms weeded out in recent years, Nolte expects the fund-of-funds sector to regain its footing. “We believe it comes back to determining what value is added,” he said. “The days of paying fees to funds of funds for 50 guys of 2% each are most likely disappearing. You need to have a real value proposition.”

Nolte takes exception to the oft-publicized notion that when hedge funds return less than the S&P 500, that means they underperformed.

“Hedge funds aren’t necessarily in the business of outperforming stocks. However, there is a tendency for some clients, and more importantly the media, to look specifically at the S&P as a benchmark,” Nolte said. “I don’t think that’s the right comparison — it’s the alternative return stream that you’re looking for.

“If you can find a hedge fund that can deliver high-single digit returns with minimal volatility and minimal drawdowns, if you had an actuarial rate of 7% you could get that with a high degree of certainty,” he continued. “You don’t need to live with the noise around stocks.”

SkyBridge raised about $1.3 billion this year through August, with more than $100 million of inflows each month, Nolte said. The firm opened an office in Zurich in 2011, which Nolte said is staffed by a “handful” of marketing people, and in July 2013 SkyBridge inked a deal with Woori Investment & Securities of South Korea for a distribution foothold in Asia.

“These efforts are about elevating our brand outside the U.S., since previously we were very much a U.S.-centric business,” Nolte said. Overall, “we want to continue to grow and diversify the product mix. We’re working on one or two new product ideas, but we don’t want to overreach — the idea is to add incremental products, get them to scale, and then bring on incrementally more product.”

SkyBridge is ultimately about investment ideas, and doing things more decisively than the next firm. “We are opportunistic and thematic,” Nolte concluded. “We will place the assets with our highest-conviction ideas, and if we’re wrong we won’t be shy about getting out of the way and moving on to the next trade.”