Lee Sanders, head of FX and fixed income dealing at Axa Investment Managers, cycles to work every day in the City of London. The changes he has seen in the skyline are as dramatic as the transformation in his business.

The fixed-income market has been through a similar metamorphosis as new regulations forcing banks to hold more capital has resulted in cuts in their bond inventories. While banks have reduced their capacity to make markets in fixed income, investors have been clamouring for yield in a low-rate environment and issuers have been selling record amounts of debt.

Consultancy Greyspark Partners has estimated that the size of the combined EU and U.S. corporate bond market increased by 57% from $7 trillion between 2007 and 2013, but the volume of corporate bonds on sell-side balance sheets fell by 82% over the same period.

As a result Axa Investment Managers has to consider the products it can offer.

“There is greatly reduced liquidity, so you have to tailor your execution accordingly,” Sanders told Markets Media. “Sterling credit can be a particularly illiquid product so you can’t really get a lot of scale, and it is getting increasingly difficult to implement portfolio changes on behalf of fund managers.”

Sanders believes that one way to increase liquidity in the fixed-income market is for buy-side firms to use their bond portfolios more actively.

Axa IM is one of a group of large fund managers aiming to launch a global corporate-bond platform this year in order to advertise their holdings to the sell side.

“Years ago we could have just gone to most banks and sold them bonds but now that demand is not always there,” added Sanders. “We have to work out what the next channel is and how we advertise that interest. It is similar to selling a house and choosing between using an estate agent or going online.”

Although Axa would be happy to advertise a bid for a certain amount of bonds at a set price on a screen, Sanders does not think the role of the buy side is to replace banks as market makers offering two-way prices.

He believes the new initiative will help banks, rather than cut them out of the market. The platform should make it easier for banks to recycle risk, allowing them to make tighter principal prices in larger sizes to institutional investors. 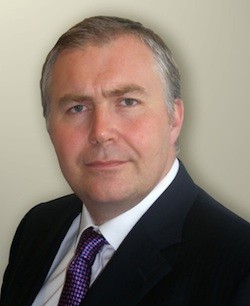 Sanders said both buy-side and sell-side firms have paid for a consultation to develop guidelines for the venue before a request for proposal for development is issued this summer.

“Opening up a way of recycling, like Tradeweb did with Dealer Sweep, improves liquidity as people will take down under a million clips knowing that they can recycle it twice a week into an auction,” said Sanders. “We think that a smart way of aggregating all these liquidity providers into a network could form the foundation of future fixed-income market structure.”

Another avenue for enhancing liquidity could be for buy-side firms to source bonds from the credit arms of private equity firms, something Axa IM does not currently do.

Sanders said: “If they want to get the messaging in the right format and post that liquidity somewhere, then we can work out a mutually agreeable way for us to show each other liquidity, I have no problem with that if it is price-beneficial.”

This change in market structure will also mean a change in the mindset of portfolio managers. Sanders said: “Going forward it is more about educating the fund managers about market structure and liquidity, and the challenges that we all face. We can’t always just be liquidity takers.”

Rise of the Screen

“In a market where everybody is flat, then electronic systems have a size constraint because people do not want to have the winners curse where people know someone has won a big trade,” Sanders said. “That is where picking up the phone and going a little bit more discreetly into the market makes sense. We see electronic connectivity as something which gives us optionality and efficiency and we think that the market will look at aggregating these systems going forward.”

“Years ago we could have just gone to most banks and sold them bonds but now that demand is not always there.”

In the first four months of this year Axa executed about 6,000 tickets in fixed income. In foreign exchange the firm executes around 20,000 tickets each year.

“We have a very efficient and robust process and execute multiples of that due to the investment we have made in electronic capability,” Sanders added.

These volumes are achieved by a team of ten people in Paris, London and Asia who report to Sanders and a separate team of five traders in the U.S. Sanders is responsible for fixed income in the U.K. and Asia, and foreign exchange and money market globally.

Sanders reports to Paul Squires, the overall head of dealing, alongside another five or so heads of execution. The dealing desks are part of the 55-strong Trading and Securities Financing unit led by Christophe Roupie.

The structure of Trading and Securities Financing would allow it to trade for third parties.

“If we take on third-party trading it opens up a host of opportunity for us to aggregate liquidity. It could mean that we grow the team a bit, but with our current efficient process and being at the forefront of market-structure enhancements, that won’t necessarily be the case,” said Sanders. “This has many efficiencies for clients such as internalising a larger percentage of the flow.”

Axa has been developing its trading systems since before the financial crisis and Sanders described the platform  as  “very sophisticated.”

The firm has an internal pricing system incorporating data from a variety of sources which can produce ‘heatmaps’ of bonds going up or down, while Sanders’ traders can provide market colour and inventory details. “We can tell fund managers where the bonds are and the likelihood of where we will trade, and levels they would have to be thinking about executing trades at,” he said.

Axa records every trade and can analyse which counterparties have been number one in a specific bond or sector. Sanders said: “We can cut the data in any way we want to get a pre-trade advantage.”

“TradingScreen, which we introduced several years ago provides our equity EMS. So it was a natural progression to use them for foreign exchange and we see them as a potential EMS in fixed income as well,” added Sanders.

In foreign exchange Axa can analyse data such as currency crosses where it thinks it is weak or crosses with a specific bank. The traders can also review creation and execution times and for example, push back against fund managers who want to execute Asian trades late in the day when there is less liquidity.

“We also average the cost savings of each bank, we then calculate which banks are more efficient in which currency crosses and this is raised it in our counterparty review process,” added Sanders. “As a result we try to put some pressure on them to make sure that they increase their pricing ability.”

“The new issue process is one of the last bastions of opaqueness particularly on the allocation process.”

In fixed income Axa can perform an internal transaction cost analysis for every fixed trade against internal benchmarks. Using data from the pricing and order management systems, Axa can analyse trades relative to the underlying market price at the time of execution and identify a cost saving per deal.

“I think what is interesting is that by telling the banks that we can drill down information to a counterparty level can help to keep them on their toes,” said Sanders.

Sanders estimated that in fixed income, the data analysis has resulted in cost savings of between five and 20 cents per trade on average depending on whether the deal involves government, investment grade or high yield bonds.

“I am not saying it is the most sophisticated system but it is a lot more than most people have got and (it) has a liquidity and size calibration,” added Sanders. “This has been extremely useful in making us more efficient and a great way to demonstrate to our clients the added value of our dealing process.”

Sanders also reviews the performance of banks who are focussed on the primary bond market to see how they work in the secondary market.

“The new issue process is one of the last bastions of opaqueness particularly on the allocation process, and it is a big point,” added Sanders. “I think that needs work by the industry including the regulator to make it more transparent.”

Sanders is involved in the industry response to the wave of incoming regulations as he sits on the advisory board for London fixed income at Quorum 15, a network established in 2008 for financial market executives to exchange ideas. The organisation has grown from an initial 15 members of more than 150 heads of desk from buy-side and sell-side firms across four continents who meet quarterly.

He said MiFID II have a big impact on the non-equities space and more on fixed income than foreign exchange.

“I think on the pre-trade, if regulators want all counterparties to make the same price and the same size to everybody, banks are just going to eradicate people who they do not want to make prices for so you are going to just see a concentration on the big institutions by the big banks,” he added. “Deals will have to be pushed somewhere else to get their execution done, we think that could potentially be companies like Axa IM.”

Sanders will have a big role in ensuring that Axa IM continues to work with counterparties to make sure it gets as much liquidity as possible, whatever the shape of the new regulatory environment. Just as all the new construction in London means that the city skyline will be completely different in ten years time, the market environment will be completely different in a decade.

“One thing that we do is try to always promote our global turnover locally. When I go to Asia, I’ll be telling our counterparties that this is just one spoke of a very, very big wheel,” said Sanders. “The hub of that is $150bn of fixed income turnover, $250bn of FX, $1 trillion of money market and  a large equity expertise, this ensures we remain a focus for our global counterparties.”