OptionsCity To Roll Out Metro Now

Trading and investing firms face the age-old decision of build or buy; the former can be better but is resource-intensive, while the latter is generally more cost-effective but may not optimally address a market participant’s particular needs.

OptionsCity’s new Metro Now software is designed to enable futures and options traders to combine the best of both choices — to buy and build in a customized fashion, rather than face a binary choice of one or the other. Slated for early-2015 rollout, Metro Now is OptionsCity’s biggest software release “in a long time,” according to chief executive Hazem Dawani.

“Metro Now opens up the world of custom widgets to our customers,” Dawani told Markets Media. “It will allow them to create and craft their own experience with the system. We modularized everything — we basically have broken down our system into widgets, so you can use what you need.”

With one fixed set of functionality, a trading-tech system can make a customer happy with a change, while at the same time making another one unhappy.

“Another challenge was that customers were building their own trading applications outside of our system, to interact with our system,” Dawani said. “But then they would have to go through our external API (Application Programming Interface) and duplicate a lot of the functionality that already existed.” 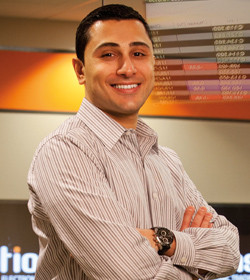 “By downloading widgets with customized functionality, say for certain markets or certain asset classes, it allows our customers to better streamline their experience and use what they need from the platform,” he continued.

Dawani likened the widget to an app. “We’re able to push out new, updated widgets with new functionality to our customers, without having to upgrade the whole platform,” he said. “We’ll be able to do it quickly, even real-time during the trading day without the customer restarting the application.”

Founded in 2006, Chicago-based OptionsCity launched Metro in 2007 as an end-to-end electronic market making and  trading platform. In 2011, the company launched Freeway as a multi-asset automated trading platform designed to deploy user-built algorithmic strategies.

“Using Freeway, customers can develop their own trading strategies and deploy them on the server with low latency, co-located next to an exchange,” Dawani said. “Now, we have taken that to the next level by allowing customers to develop their own widgets through our API. They can bundle existing widgets of Metro with custom widgets built by us or them, and run it seamlessly as one system and as one experience.”

OptionsCity is currently working with select customers to test and build widgets for Metro Now. “The plan is to put it in the hands of a couple customers in January and shortly after, do a full-blown production release,” Dawani said.  “The concept is simple – providing modularity and a customized experience.”