A government official is now warning about a possible financial transaction tax (FTT.)

Wait, someone in government is against taxation?

Yep. Treasury Secretary Steven Mnuchin recently said he has a number of worries about FTTs. 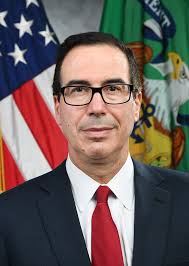 “I am very concerned that that would destroy our capital markets, and the cost to American holders of mutual funds would bear the majority of the cost,” Mnuchin said at a House Financial Services Committee hearingas reported by The Hill.

The taxes are being proposed by some in Congress, including Sens. Bernie Sanders (I-Vt.) and Elizabeth Warren (D-Mass.), as a means of paying for different social service programs such as universal health care or assisting students with student loan debt. Both are running for President and see the tax as a means of either income redistribution/equality or to pay for their proposed social programs.

Supporters of taxes on financial trades argue that these taxes would target wealthy investors and would help to reduce inequality and inefficiencies in the financial markets.

“The reality is that average everyday investors, especially mutual fund investors and those that are saving for retirement, will be severely impacted by this nefarious tax,” said publicly Rep. Patrick McHenry (N.C.), the top Republican on the Financial Services Committee, in response to the tax.

Mnuchin said that Treasury has “committed to do some work internally and on an inter-agency basis to study this to see if we can try to come up with some research on what the impact would be.”

He added that an FTT could lead to financial activity moving from the U.S. to places such as London and Hong Kong. He also said it would be a “burden on economic growth, and more importantly, it would be a burden on all the American taxpayers who already pay taxes and hold mutual funds and have their savings and their retirement in mutual funds.”