The Museum of Modern Art is featuring the American Modern: Hopper to O’Keeffe exhibition. Kathy Curry and Esther Adler curated this exhibit to largely draw on MoMa’s collection of American art created between 1915 and 1950, and displays the culture of Americans in a rapidly changing society at the first half of the 20th century.

On display are paintings, drawings, prints, photographs, and sculptures by well-known artists of the era, such as Charles Burchfield, Stuart Davis, Edward Hopper, Georgia O’Keeffe, Charles Sheeler, Florine Stettheimer, Alfred Stieglitz, and Andrew Wyeth. The artists both celebrated and questioned the oncoming changes in society. American Modern offers these artists’ views of the United States during the time of the Great Depression and two world wars. “Although originally conceptualized as drawings, it grew into a multi media show” said Kathy Curry, one of the show’s curators. Lucky for us that it did, because Georgia O’Keeffe’s An Orchid  will be on display for the first time in MoMa, since it was donated in 1990 by the artist’s estate .

The exhibit is organized thematically by landscape, industry scenes, still-life compositions and portraiture with each genre occupying it’s own room. 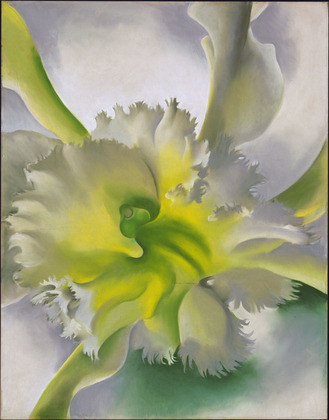 The clash between a rapidly modernizing society and the nostalgia for an American countryside is a theme that runs throughout the exhibition. An example of this theme is shown in the first painting to enter the exhibition, Edward Hopper’s House by the Railroad (1925). This picture depicts a disappearing American countryside. It shows a Victorian house partially blocked by a railway track. Also evident throughout the artwork is the lack of human life in the factory, city, and landscape pictures. Although seemingly uninhabited, human presence is felt through the bridges  and buildings in the city pictures. Grant Wood’s In the Spring is another example of an idealized landscape. The farmer pictured in front of the rolling hills of a farm in the print seems full of promise for the crop to come. Realistically, this was painted at the start of the Great Depression and the Dirty Thirties where the reality of farming was far removed from the artist’s rendition.

Contrasting the rural scenes is a whimsical painting by Florine Stettheimer describing a Manhattan social gathering in Family Portrait, II.