Had Enough of Black Friday?

Have American consumers finally had enough of Black Friday? Well, according to last year’s figures (both in-store and online) from Thanksgiving through the weekend, including the Friday after Thanksgiving, an estimated drop of 11% to $50.9 billion, from $57.4 billion from 2013, according to the National Retail Federation. Sales fell despite many stores opening earlier, staying open later and even were open on Thanksgiving Day.

Many retailers offered the same aggressive discounts online as they did via in store promotions, but the web failed to attract more shoppers and spending during Black Friday and the four-day weekend compared with the year before. The average shopper dropped $155.55 with online retailers, down 10.2% from the year before. 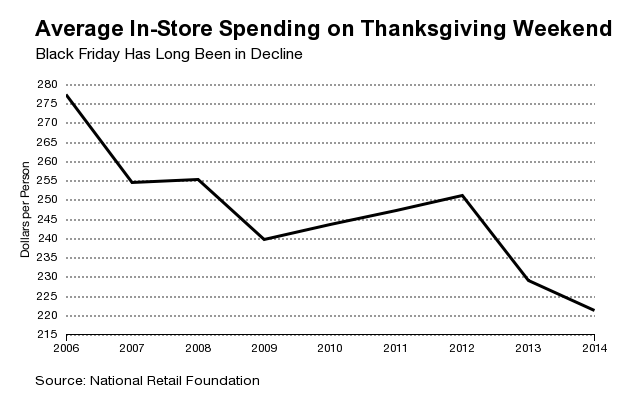 However, experts are saying Black Friday 2015 may be the biggest online spending day in history and with just days away consumers are gearing up, as is the big online stores, such as Amazon, Best Buy, Target and retailers Macy’s. It’s estimated during these four days and the proceeding Holiday Season ahead spending will top $630.5 billion – an increase of more than 3.7% from 2014.

So what are the hot brands/products: televisions of course, which was the traditional means how retailers drove in the numbers into their stores offering them at a steal to upsell you on all their other brands. The traditional products, such as clothing, computers, x-box, toys and sporting goods will represent a bulk of this years buys the experts are predicting, but many deem a surge in luxury goods, as well as technology products and home products such as cookware, dish sets and home furnishings.

So when it comes to Black Friday, particularly online, shoppers are looking for the hottest products at the lowest prices. Blackfriday.com is the authority on Black Friday and holiday deals, and it’s their goal to make your shopping experience simple and stress free. They feature thousands of deals and you can skip the crowds and hustle and bustle of the crazed shoppers pushing you at of the way to find their size or cease the opportunity to buy at a vast discount that item.